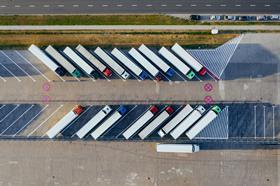 A shortage of lorry drivers is resulting in fresh produce being dumped or left to rot in cold stores, while supermarket shelves and restaurant plates go empty, produce suppliers and retailers warn.

The driver deficit – the worst in over 20 years, according to driver recruitment agency Driver Require – is the result of an exodus of EU drivers post-Brexit and government failure to recruit a replacement workforce. The coronavirus pandemic, which has prevented driving tests and training for over a year, as well as a hike in driver costs, has exacerbated the shortfall.

Haulage companies are therefore struggling to deliver goods – either imported or domestically produced – to UK retailers and restaurants, causing delays and product losses, and empty plates and shelves, distributors say.

Tesco, the UK’s biggest supermarket chain, is understood to have informed the UK Government's Department of Transport that its suppliers are being forced to bin nearly 50 tonnes of fresh food every week because there are too few lorry drivers to transport produce to stores.

Meanwhile, the Federation of Wholesale Distributors (FWD) is so concerned that it has urged the government to consider having Army trucks on standby to ensure there are enough vehicles and drivers to distribute food.

“It’s shocking, but it’s true. The acute shortage of HGV drivers is now the direct cause of perfectly good, graded and packed fresh produce being dumped or left rotting in coldstores,” Tim O’Malley, managing director of major UK produce distributor Nationwide Produce, told FPJ. “In all my years in fresh produce I’ve never seen anything like this. Goods are being produced, but not delivered.”

The current situation – dubbed a national crisis by some suppliers – is predicted to get worse as the UK continues to open up after lockdown, and demand increases from hospitality and retail.

“The driver shortage has reached crisis point for some of our members and we believe it is likely to get worse as more hospitality venues open and demand increases,” said FWD chief executive James Bielby.

“With the estimated 70,000 shortfall in HGV drivers, some wholesalers have had to limit the number of deliveries they make to convenience stores which has led to some availability issues.

“We’ve asked the government to re-instate the temporary extension of drivers’ hours (from 9 to 11) which was in place last year but ended recently. Other proposals we are putting forward include ending furlough for HGV drivers, temporarily waiving requirements for medical certs and CPC for those which have run out, and using army drivers to deliver to vulnerable communities.”

Meanwhile, in an open letter to the FPJ, Nationwide Produce's O’Malley urged produce industry suppliers to work with hauliers and customers to get through this crisis.

“I would urge you not to shout at your hauliers and threaten them with bills, as that will get you nowhere – work with them to find solutions,” he wrote. “Customers will have to be far more flexible on delivery times. We also need to stop hauling fresh air around the country. Full pallets and full loads are what we need in a crisis like this.”

O’Malley added that customers need to be more flexible on date codes to allow direct deliveries from abroad. “I’m sure this will eventually lead us all to adopt better practices, but for now we need to work together to find a way through this crisis,” he said.

'Our 2021 Logistics Report shows that 29 per cent of logistics businesses anticipate that they will be unable to fill vacancies for HGV drivers this year; a further 14.5 per cent expect long delays before filling a role. With the logistics industry in urgent need of these workers, Logistics UK is urging the government to include training for HGV Drivers in their list of courses funded through the National Skills Fund to reskill potential employees and help recruit them into the industry.

“Logistics UK is also urging the Driver and Vehicle Standards Agency (DVSA) tomaintain its fast-trackprogramme to catch-up onat least 30,000driving teststhatwerepostponeddue to COVID-19between March and December 2020; this has left thousands of potential HGV drivers waiting in the wings when the UK needs themmostto support every facet of UK PLC.”