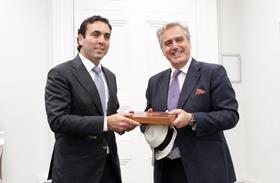 A delegation led by Ecuador’s Minister of International Trade, Pablo Campana, landed in London on Friday on the latest leg of a global tour to drum up new trade and investment opportunities.

The message coming from president Lenín Moreno’s new government in Quito is loud and clear: Ecuador is open for business.

During a networking event for potential investors held at London’s Royal Automobile Club on Tuesday, Campana said Brexit represented a huge opportunity to boost trade between the two countries.

The minister had earlier met with Mark Garnier, the UK Minister for Investment, to kick-start the process of negotiating a future trade deal once the UK has left the European Union.

Ecuador is believed to be seeking a similar arrangement to its current relationship with the European Union, which saw it accede to the EU-Colombia/Peru trade agreement in January of this year.

“Ecuador is a big fruit exporter while the UK is an exporter of capital goods so this would be a win-win situation for both countries,” Campana told Fruitnet.

With an average annual growth of 3.9 per cent between 2006 and 2015, Ecuador’s economic growth outstrips that of most other Latin American countries. It is also ranks second in the region in terms of infrastructure according to international league tables.

Campana said the new government had a pragmatic vision of Ecuador’s future role on the world stage that involved working hand in hand with the private sector to exploit the country’s full potential.

“We want to progress from being an exporter of commodities to an exporter of value-added products,” he stated. “Ecuador has abundant water, fertile soils and a solid infrastructure. We need to make strategic alliances with countries that can provide the capital to help us achieve this potential.”

Campana stressed that the country’s political and economic stability, together with recent reforms to the legal system, meant foreign investors could be confident that they would be afforded the necessary legal protection when entering into long-term contracts.

“Primarily we are looking for investment in large-scale projects in sectors that we consider to be of key strategic importance such as mining, oil and hydroelectricity,” he said.

The UK visit marks the latest stage of Campana’s month-long tour which has already seen him visit China and the US and will subsequently take him to Switzerland, Sweden and Norway.

Commenting on the opportunities for Ecuadorean fruit in China, Campana said the recent opening of that market for Ecuadorean mangoes was a huge opportunity for the sector and that he had also held fruitful discussions with his Chinese counterparts on securing access for pitahaya, avocados and table grapes among other agricultural products.

Elsewhere, talks are also underway to open up the Japanese and South Korean markets for mangoes and the US market for avocados, table grapes and passion fruit among other products.

According to Paúl Peñaherrera, director of trade promotion agency ProEcuador, the introduction of new technologies has led to a considerable increase in fruit production over the past three years, as well as a marked improvement in quality.

“The growing emphasis on exports is lifting quality and safety standards across the industry, through the implementation of good agricultural practices, better selection of cultivation areas, and more attention to water quality, fertilisation, pest control, harvesting and post-harvest handling. Our main products are now covered by GlobalGAP certification,” he said.