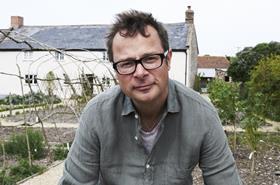 With his trademark rustic appearance and penchant for eating straight from the hedgerow, Hugh Fearnley-Whittingstall has long been the most vocal advocate of environmentally-friendly eating. And ironically enough it seems that the pressures of creating such a platform for the benefits of fresh produce have come at the cost of the Hampstead-born horticulturist’s own personal love affair.

“A few years ago, I realised I was so busy extolling the virtues of growing your own food, going fishing, finding ingredients and foraging, that I wasn’t getting as much time as I wanted to do it myself,” explains the 53-year-old. “I decided I was going to eke out more time to be at home to look after our own garden and livestock. I scaled things back a bit, so we could manage it more on our own, and I’m back in a place now where I’m more involved with things, and I have a bit more time to go fishing too.

“It seemed a bit mad to me that the things I was passionate about and was making shows about, I was just too busy to have time for myself.”

Speaking to Fearnley-Whittingstall, there’s little doubt the enthusiasm for proactivity in produce (that formed the ethos of his River Cottage brand) still remains. “That pleasure of being able to grow your own potatoes, to pick your own greens, even to collect your own eggs in the morning – that’s what it’s all about. It gives you that sense that what you’re cooking with and eating has been produced by yourself. But it’s not something you can undertake lightly; it’s a decent commitment.”

And as well as homegrown produce, Fearnley-Whittingstall is also ever ready to espouse the fact that, unlike money, great food really does grow on trees – or bushes, or hedgerows.

“Everyone can go foraging!” he beams. “I have a sloe-bush at home – the berries are lovely and dark when ripe. I make plenty of sloe gin and vodka in winter, and maybe slip them into a few other things as well. Foraging is there for everyone when they’ve got the time.

“Of course, self-sufficiency is only a small part of it,” he is quick to add. “It’s clear to me that people do want to grow their own food, even if it’s herbs in a window box, but it’s not an option that’s open to everyone. So the more, as an industry, we can encourage creativity in using produce, the more the upturn in using produce will continue.”

The fact we are still playing catch-up, Fearnley-Whittingstall believes, is as much down to the cult of celebrity chefs. “The fashion has been showpiece food that’s as rich and elegant as possible, and for that reason we have been incredibly lazy as vegetable cooks down the years. Vegetables is the bit on the side, the boring junk, the bit that you have there because it’s virtuous. And that is such a mad mindset, because the reality is that the plant foods have easily the widest range of tastes and textures and aromatics.

“Obviously when you include fruits, seeds, nuts and spices, this is the palette that allows great cooking. And listen, I’m no vegetarian – I still eat meat and fish – but what I have realised and what I think is a good thing to incorporate into our cooking, is that making and putting plants front and centre is the way to go. There’s no sense of deprivation about that; it really is a celebration.”

The chef reveals he was inspired to cook after his parents left London to take on a rented farmhouse in Gloucestershire. Upon arrival, one of the first things he spotted was the vegetable garden. “I was only very young and it was a little bit overgrown, but the patch had some stuff in it that was ready to eat.

“I was at a very impressionable age and was very surprised that you could actually grow food! I remember prodding baby peas from the pods and wiping carrots on the wet grass to get the dirt off before munching away. That just stuck with me in being a real pleasure, and when I got a chance to grow some food of my own, I jumped at it.”

Often turning away from high-end dining, expensive cuts and exotic flavours, Fearnley-Whittingstall has increasingly become a sounding board for simple produce, and his River Cottage team remain at the forefront of organic food in Britain.

“Food is one of the great glues for a community that knows itself,” he says. “That’s what River Cottage has been about from the beginning – it’s not just about growing your own, it’s about knowing where your food comes from; it’s about getting it from other people who live near you and who grow it brilliantly. And why not? After all, vegetables and the combinations are genuinely infinite – across herbs, spices, plus fruits and grains – this plant-based kingdom is infinite, so let’s continue to embrace it.”