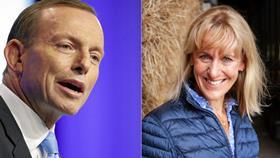 “Back in the 1990s when Farmers in Competition was the topic of the Conference, discussion was all about the EU Common Agricultural Policy and how it can best support farmers and help them to compete in often complicated supply chains,” said Marion Regan, OFC Director and webinar chair.

“This is all about to change for UK farmers as we leave the EU, possibly without a deal, and we will be attempting to make new trade deals with nations around the world who produce food under very different circumstances to us in the UK.”

Tony Abbott, who during his time as Australian Prime Minister closed trade deals with Japan, China, and South Korea, said he knows the importance of maintaining a competitive agricultural environment whilst actively pursuing free trade deals.

“My role is not to negotiate trade deals for Britain, but as someone who helped to finalise deals with Australia’s biggest trade partners that saw our two-way trade grow even faster, my role is to champion trade knowing that the more you trade, the more you prosper.

“When it comes to trade the aim should always be to freely trade high-quality goods and services. Historically Britain has always welcomed goods, ideas, people and capital. Britons have always had a robust sense of their capacity to do things well, and to learn from anyone who might be able to do better. That is why Britain has made such an extraordinary and unique contribution to these times and that’s why global Britain should be able to do more for the world, and for itself, than a Britain that needs to double check things with Brussels,” said Abbott.

With the recent announcement of a Trade and Agriculture Commission to safeguard UK interests, Minette Batters noted that the public want any future trade to be fair and transparent.

“We formed the most extraordinary coalition of groups and people led by Jamie Oliver which led to one million people signing our food standards petition. What it says is that people want our trade to ultimately be fair and not undermine our farmers.

“My role is to speak truth to power, and our government made an ironclad commitment that they would not undermine farmers.

“For all of us on the periphery, it is parliament that should and can decide our future. And with a majority government, it is absolutely vital, being a country that is made up of four nations, that this is an open and transparent process and not dictated behind the four walls of the Department International Trade,” said Batters.

With hundreds participating in the debate online, the focus soon turned to the potential importation of goods that aren’t produced to the same standards as those in the UK.

“Claims that one country, or another, might want to mistreat its animals, poison its people or spoil the environment are unlikely to stack up and can easily become a smokescreen for those who would rather not change and innovate,” said Abbott.

“Obviously, it is good to have higher standards when it comes to welfare and safety. While it is right and proper to say that food sold in Britain has to meet particular standards, it is not up to Britain to tell other countries how to meet those standards.

“I’m all-in favour for global cooperation for standards, but if we try to do this through trade deals, there won’t be any trade deals.”

Batters argued that the UK must take a different approach to protect its interests.

“The UK has been a very lazy exporter as we are a prized market and service-based economy. We have to take a very different line on this to protect our countryside,' she said.

'Politically, we have been disconnected from our food systems and we have been focused on ever-cheaper food, rather than the values that need to drive food production. It’s about changing the conversation, being radical and aiming up.'

The 2021 OFC will be hosted as a digital one-day conference on 7 January 2021 and will celebrate its 75th anniversary since the first conference was held in 1936.

The next and final #OFCBitesize Webinar will debate the ‘A Climate of Change: Agriculture - the solution not the problem’ on Thursday 3 December 12.00 – 13.00.