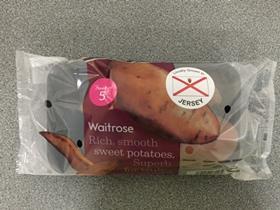 Sweet potatoes grown in Jersey have launched in local Waitrose stores for the first time.

Grown by The Jersey Royal Company, the crop was successfully trialled last year under glass and following on from an earlier crop of Jersey Royal new potatoes.

Launched in commercial volumes at the end of January, they are being sold in both a loose and pre-pack format, and have been labelled to highlight their local provenance.

Originating from Central and South America, sweet potatoes need a stable 24 degrees with no frost, lots of sunshine and warm nights, so growing in the northern hemisphere can be challenging, The Jersey Royal Company said.

But it hailed sweet potatoes as the “ideal compliment” to existing cropping plans in Jersey glasshouses, which are unused for most of the year.

The Jersey Royal Company is a subsidiary of Produce Investments, and sister company of major potato supplier Greenvale.