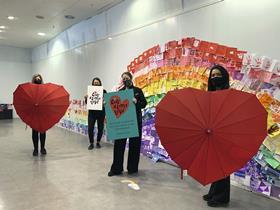 John Lewis has announced it will donate over £1m this summer to more than 1,000 charities and community organisations to help end child poverty.

The move is part of the retailer's Give a Little Love programme, which aims to make a lasting difference to those in need, and comes following sobering figures showing that a total of 2.3 million children experienced food insecurity between March and August last year, and 850,000 reported that they or their families visited a food bank.

The issue has been thrown into the public eye following footballer Marcus Rashford's high-profile campaign, and John Lewis is among those to sign up to hisChild Food Poverty Task Force.

To help tackle the issue, each John Lewis and Waitrose shop will be directing their regular community donations to charities in their own communities that support children in poverty. The move will run from May to July, providing support during the May half term and summer holidays when millions of children are at risk of being hungry.

Support will be given through donations of money, products - such as clothing or kitchen equipment - and food donations.

Marija Rompani, director of ethics and sustainability at the John Lewis Partnership, said: “No child should ever go hungry or be without basic human needs and we want to do all we can to help. By working with the many incredible charities in local communities across the country, we hope to make a real impact and help as many children as we can.”

Rashford added: 'John Lewis Partnership is a valuable founding member of the Child Food Poverty Task Force and the company has strongly demonstrated their commitment to ending child food poverty across the UK since we formed. 'Give a Little Love' was a powerful and touching campaign over the Christmas holidays and I'm thrilled to see that campaign being built upon to guarantee more of those in need get the help they deserve.'