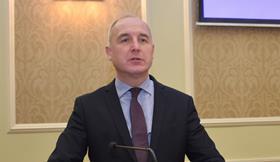 The availability of seasonal labour post Brexit was a big topic addressed at the NI Fruit Growers Association conference in Armagh.

David Camp, the chief executive of the Association of Labour Providers (ALA), outlined some of the key facts and figures surrounding the labour force and offered advice on how to retain workers.

Established in 2004, the ALA is a member funded, not-for-profit trade association, which has grown from 18 to 350 members in the UK’s agriculture and food production sectors.

Mr Camp highlighted the fact there is record employment in the UK and that unemployment in Northern Ireland was at a record low.

He also said that there are more jobs than people and high employment throughout the EU meant many European workers were returning home as they had more choice of seasonal work available.

A survey conducted by ALP concluded that 74 percent of employers agreed there was a short supply of workers during the last three months of the 2019 season.

Of those employers surveyed 94 percent agreed the availability of labour was just as bad in 2019 than during the previous year.

When referring to offering jobs Mr Camp added: “You need to ask yourself some key questions. If there are plenty of jobs around, why would someone want to come and pick apples on your farm?

“Do you offer agricultural minimum wage only, no guaranteed hours, only a few days work. Do you offer a dirty, damp caravan to the workers?

“Or do you offer hard but enjoyable work? Are you nice people to work with, offering good wages, regular hours, friendly supervision and pleasant accommodation?”

These he said were the key factors that attract potential employees to come and work on farms.

Mr Camp offered advice to growers suggesting they should hire workers directly but use a Gangmasters and Labour Abuse Authority (GLAA) licensed labour provider and engage with the Seasonal Workers Pilot.

He did stress that “anyone who is not employed by your business and supplies you with workers must hold a GLAA licence. If you supply other farms with workers, you will likely need a licence”.

“Your recruiter should be a professional, not a farm worker who has lots of ‘friends’ and that the recruiter must be fully up to date with recruitment and employment law.”

And finally Mr Camp warned growers about the risks of using criminal gangs to supply labour. He said growers should “understand that your business reputation and livelihood is at risk from organised criminal gangs” and “use only professional recruitment channels.”

“Do not trust the ‘helpful’ person who says their friends or family are looking for work. Talk to workers, see how they are dressed, how they act, how they get to work, where and how they live.

“Pay workers directly, not the group leader and always remember, if it’s too good to be true, it’s not true,” he said.