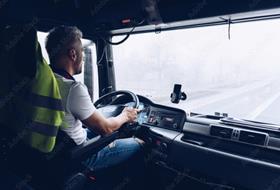 Worldwide air cargo operations are struggling to cope with the backlog. The onward forwarding of cargo is in turmoil, resulting in food supplies being left on the ‘airside apron’ at Heathrow. Low emission zone charges at Heathrow are triggering a switch to other European airports such as Amsterdam, Brussels, Frankfurt and Paris. A lack of trained staff following furlough scheme redundancies is impacting seamless transfer and creating a heightened security risk. The price of shipping containers has rocketed and availability is seriously depleted.

Despite the assurances of our government, the reality is that those involved in the supply chain for essential food and drink are facing dire operational challenges. Looking at the current situation, these are only likely to worsen as we edge towards Christmas and the new year.

Try buying a new lorry to add to your fleet of vehicles in an effort to improve efficiency. It is nigh on impossible. And the shortage of HGV drivers who are so key to ensuring the onward smooth transfer from air or ship remains a critical issue, despite the various initiatives that have been put in place.

Even when new drivers are recruited, there is a clear lag between them being a newly qualified driver, and the employer feeling sufficiently confident that they are ready and capable of taking on long-distance journeys.

For those drivers already in the system, morale is low, and many are choosing to seek alternative, less stressful employment.

HGV drivers have traditionally been treated badly in this country. While I have every sympathy and utter admiration for the challenges faced by NHS staff who have led the UK’s response to Covid-19, it’s a shame that the same level of respect is not directed at the drivers who have continued to work tirelessly to ensure the nation has access to essential food supplies.

Suicide rates among HGV drivers are 20 per cent higher than the national average. Some 75 per cent of all suicides in the UK are male, like the overwhelming majority of truck drivers. Spending endless hours alone in the cab, on the road, alone with their own thoughts, these drivers are high risk.

Add to that the heightened sense of urgency to get consignments from A to B to make up for so many other delays and it’s not difficult to see that this is a stressful occupation. Not to mention the fact that HGV drivers regularly face abuse when trying to park their vehicles, and they are constantly at risk of a break-in and/or attempts by migrant stowaways to seek refuge in the vehicle.

And yet what thanks do these invaluable workers receive for their efforts? Being stranded for hours without food and water because of port delays? Struggling to find somewhere to get a good night’s sleep because of the limited parking facilities that welcome HGV drivers. Experiencing problems to access the most basic of human rights – somewhere with clean toilets, a dedicated wash and shower facility, and the ability to buy a nutritious hot dinner.

With the increasing pressures being placed on the HGV driver community due to the ongoing serious delays at both sea and airports, isn’t it time the UK woke up to the fact that our drivers literally hold the key to putting food on the table this Christmas?

This country is in for a very bumpy ride in the foreseeable future. Don’t believe the politicians who refer to a 24-point plan or strategise that research is underway to address the problems. The supply chain industry needs properly planned solutions, not knee-jerk reactions to every crisis.

Part of this must be an improved appreciation for the outstanding efforts of our HGV drivers.

PML is committed to raising the standard of driver welfare. Way ahead of any of the platitudes put forward by government officials, we’ve been planning astate-of-the-art facilityconducive to driver needs.

Action, not words, is what counts.