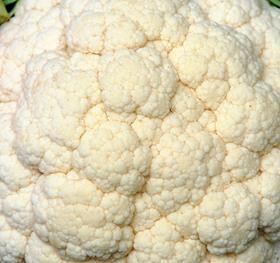 The so-called 'cauliflower creak' - an eerie sound which drifts across the fields of Cornwall and Lincolnshire - could be at its loudest for a quarter of a century this weekend (28/29 June).

That's the prediction of Morrisons farmers, who say cauliflower creak will be particularly 'noisy' because a sudden increase in night temperatures forecast this weekend has followed the coldest June for 24 years.

If the forecast temperatures arrive, this will cause a 'particularly rapid growth and a sweeter taste'.

The creak, a loud squeaking noise heard across cauliflower farms, is caused by a sudden growth or ‘flush’ of the vegetable. The plants are expected to grow by three centimetres a day, this weekend and this causes their florets to rub together and create the sound.

Due to the colder weather, this year’s main cauliflower harvest started two weeks later than normal. It will arrive in Morrisons stores this week (w/c 22 June), and most of the supermarket’s crop originates from Lincolnshire and Cornwall.

This season’s cauliflowers are expected to be sweeter tasting, due to them having grown so quickly and their ‘flesh’ being younger. The vegetable will be harvested and transported to Morrisons stores within 48 hours.

Morrisons cauliflower farmer David Simmons, said: “It’s rare for the cauliflower creak be so pronounced. This weekend’s warmer nights combined with long daylight hours means the crop will come to harvest in record time. It’ll result in the sweetest tasting cauliflowers for quarter of a century. So if you haven’t tried the vegetable yet, this is the crop to go for.”