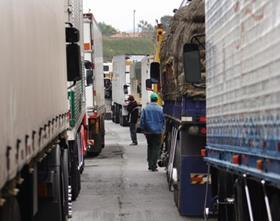 Major disruption at UK ports will only last about 48 hours before the British government steps in and starts letting in lorries without paperwork or tariffs.

That is the prediction of Nature’s Choice commercial director Vernon Mascarenhas, who says his hypothesis is shared by others in the fresh produce industry.

The New Covent Garden catering supplier’s comments follow this week’s leak of the Operation Yellowhammer documents, which predicted a three-month “meltdown” at UK ports in the event of a no-deal Brexit.

Mascarenhas believes border holdups and empty supermarket shelves in short-life products like leafy salads will put pressure on the government to quickly start letting produce through tariff-free despite the WTOP rules.

This will then force through a deal with Brussels, he thinks, but an industry source pointed out that although this is possible, any deal made after the Brexit deadline would have to be ratified by every individual European parliament. This is because once Britain leaves the EU, it will no longer be operating under Article 50.

“We think once the first 48 hours are over something will give,” he said. “I’m not saying either side anyone will back down – Boris Johnson is gearing up for a general election – but the rules will change for a while until some kind of agreement is reached.

“The main reason for paperwork is to keep check of tariffs so if you get rid of the paperwork, there won’t be tariffs, and that’s probably best for both sides because the tariffs for British farmers going to Europe in dairy and meat are just phenomenal.”

The IGD’s director of strategy Jon Woolven didn’t go so far in his predictions, saying there will “ideally” be “lots of cushioning measures agreed to smooth the path of adjustment”.

“An example could be an agreement by EU countries not to insist on heat-treated pallets for deliveries from the UK, even though that’s the requirement by default once we leave,” he said.

“Some agreements of this nature are in place already, for instance on air traffic control, but industry will hope to see more. The UK government has also introduced ‘Transitional Simplified Customs Procedures’ for incoming deliveries, to minimise hold ups.”

Another short-term impact of no deal could be that companies simply stop shipping short-life products to the UK as they feel there’s “no point in attempting the journey”.

“There could be a switch from road deliveries to air, although that would be at a cost, and air freight capacity is limited too,” Woolven continued.

“There might also be a switch away from some European sourcing to other parts of the world, although in November there is more Southern Hemisphere sourcing anyway.

“If there is disruption to fresh food in the early days, retailers will be able to draw on their inventories of ambient food to keep the shelves full.”

Longer term, he expects “the problems to be ironed out, supply chains to adapt and something resembling normal service to be resumed”.

The cost equations will have changed, however, and this will mean different products enjoy a comparative advantage, influencing prices, sourcing decisions and consumer diets.