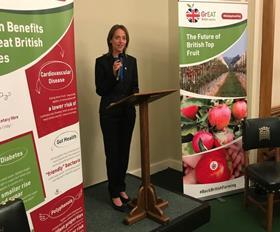 The chairman of the All-Party Parliamentary Group for Fruit & Vegetable Farmers has vowed to fight for a large increase in the provision of seasonal labour.

Helen Whately, the MP for Faversham and Mid Kent, told an audience of growers at this week’s British Apples & Pears event in Westminster that the issue of securing a larger labour force is high up the agenda.

“I bump into farmers and growers all the time and the first thing they talk about is the [labour] situation,” she said. “We are working really hard to make sure growers get the workers that they need. I’m also aware with the small scale of the pilot SAWS scheme. I know it’s a drop in the ocean in terms of the number of workers we need, but it is at least getting going on the concept and testing it. I’m arguing for that to ramp up rapidly to be a proper, at-scale scheme.”

Whately revealed that she will be joining British Apples & Pears executive chair Ali Capper this week in a meeting with immigration minister Seema Kennedy, where they will be looking to put the industry’s case, discuss lessons learnt from the pilot scheme and call for it to be ramped up.

“I do not want this fantastic industry to be held back by a lack of labour,” she insisted. “We cannot let that happen.”

Elsewhere in her speech Whately, who voted Remain in the referendum but who has tended to vote against closer alignment with the EU in parliamentary business, acknowledged the challenges of Brexit but urged the industry to grasp the positives.

“It is a chance to make sure that agricultural policy reflects the needs of British growers,” she pointed out. “I do think it’s a real opportunity to have a reset and make sure that fruit is considered higher up the rankings versus other kinds of food production. And a chance to support producer organisations, which have done such great work in making sure the people are eating British apples and pears. We all want to see more British fruit in stores across the country.”