New board members for D&F McCarthy 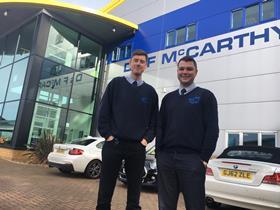 Norfolk fruit and vegetable wholesaler D&F McCarthy has appointed two further family members to its board of directors.

Daniel and Samuel McCarthy are the sixth generation of the family to be involved in the business since it was established in 1877. Daniel is now transport director, having been the company’s transport manager since 2015 and previously working in the warehouse operation.

Samuel takes up the role of sales director. He joined the company in 2015 after studying maths at Leeds University and having initially been involved in an accounting role.

McCarthy’s managing director, Martin McCarthy, said: “This positive move sets the scene for the transition over the coming years as the current directors head towards retirement and start to relinquish their day-to-day involvement in the company.

“As a family business, we are always looking to the future. Continuity is important to us and these appointments should be the start of a smooth transition from one generation to the next. With the great team of young people we have in place at the moment, the company will relish the challenges that the future will bring.'

Since moving to a purpose-built facility on Broadland Business Park in Norwich in early 2010, the company has expanded its workforce from 35 employees to the current 72, with the total payload capacity of its fleet nearly doubling from 52 tonnes to over 100t.