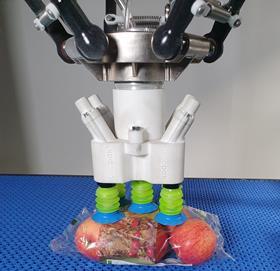 According to the manufacturer the end-effector, which is the subject of a recently filed patent application, features compact dimensions and higher-spec vacuum generators, which translate to an agile robot head that can pick and place at faster speeds with greater accuracy.

The UniPAKer fresh produce robot was designed for packing bagged fresh produce such as apples, Brussels sprouts and potatoes into crates. Using a parallel arm delta robot, Brillopak says it significantly increases productivity, while improving pick and pack presentation to reduce waste. The system will consistently load up to 75 packs per minute in VFFS, tray-sealed and flow-wrapped packs and is ideal for vegetables, fruits and salad up to 1kg.

The UniPAKer can run with a variety of end-effectors depending on the product being packed. For bags of apples or Brussels sprouts, the company recommends a vacuum head and says it takes a different approach to vacuum handling than others in the industry, deploying cups with independent vacuum generators for greater control over the picking and placing operation.

No more 'hit and run'

The principal driver for this latest project was to stop the robot head from making contact with the crate sides when placing packs of apples, Brillopak explains. The first-generation head was slightly larger than the footprint of the apple packs (generally 63-78mm in diameter), which meant that when it dipped down into the crate, it was touching the crate sides, sometimes pushing the crate out of position. The problem was that the robot had no way of knowing when the crate had moved, so bags were not always ending up in the correct position within the crate.

To overcome this, Brillopak has redesigned the end-effector so that the vacuum generators are located within the head rather than sitting on the outside. Air is drawn into the centre of the head and fed to each of the five generators, all of which are contained within a special internal casing. This use of all available internal space eliminates the need for external piping, reducing the overall size of the head.

As well as delivering a reduction in footprint, the redesign has improved the head’s suction capabilities through a combination of more consistent, faster airflow and larger vacuum generators, Brillopak continues. To counter the higher noise levels that go hand in hand with faster airflow, it has used the area above the head to build silencing into the design.

Brillopak technical director Peter Newman said: “When suction is weak or inconsistent, it introduces the risk of product moving around and causing the pack to swing, potentially hitting the side of the crate as it is lowered. A stronger, more uniform vacuum means the robot holds the packs squarely and tightly so it can move down into the crate at a faster speed in a more controlled manner.”

There is also a reduction in ‘dwell time’ – split second periods when the robot is waiting for the suction to either build or relax. Brillopak estimates that the improved suction has reduced this ‘dwell time’ from 0.3 to 0.15 seconds. Dwell time between shutting off the vacuum and the pack being released into the crate has also been reduced by 0.1 seconds (from 0.25 to 0.15 seconds) thanks to the more consistent suction.