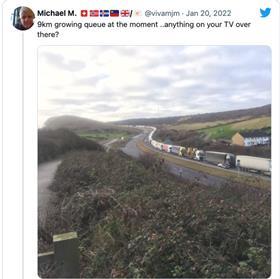 The BBC’s fake-news busters, the Reality Check team, have suggested that lorry queues at Dover are down to additional paperwork required post-Brexit - although the port itself claims this is 'not the sole reason for queues'.

Drivers have reportedly expressed fury at the hold-ups on the south coast, which are said to be so long they can now be seen from space.

One haulier tweeted that he had been stuck in queues up to 9km long since full customs controls came into force at the beginning of January.

According to the BBC, there were other reports on social media of even longer queues in Calais, of up to 18 miles.

Some drivers have allegedly blamed Brexit, while others have pointed to a cocktail of Brexit checks and cumbersome Covid paperwork, according to media reports.

The BBC’s Reality Check team conducted its own investigation into the hold-ups. It quoted trade correspondent Chris Morris as saying that a raft of new measures for goods imported from the EU would continue to cause delays - even as people get used to the updated system.

From 1 January 2022, lorries taking goods from Great Britain to the EU, have to use the Goods Vehicle Movement System (GVMS), the UK government’s new IT system, to get any goods through customs in ports that use it. This includes Dover and the Channel Tunnel terminal at Folkestone.

BBC trade correspondent Chris Morris was told it had taken about 15 minutes per vehicle to process the paperwork.

He added that this was likely to get faster as people got used to the new system, but delays were not going to disappear completely. And that’s a problem when the roll-on roll-off ferry operation is so time-sensitive.

The Port of Dover said that increased customs checks were “not the sole reason for queues”.

It pointed to other factors including the volume of freight, work going on in the Port of Dover and a number of ferries being out of action for servicing.

Elements of this article were updated to reflect the BBC's own editorial line about the true cause of the disruption to traffic around the Port of Dover.