New tools in fight against SWD 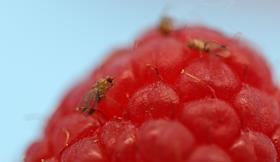 Scientists in Cheshire have developed a new attractant to help monitor a serious economic pest of fruits including grapes, plums, cherries, currants, strawberries, raspberries and blackberries.

With its rapid spread across the globe, the fruit fly species Spotted Winged Drosophilid, or Drosophila suzukii, is on the alert list of The European and Mediterranean Plant Protection Organization (EPPO).

The International Pheromone Systems team has spent three years developing a special formulation and a trap that they hoped would perform better than the ones already available. Independent trials and analysis in Switzerland have shown that the new products perform 300 percent better than two market-leading products, the company said.

International Pheromone Systems' technical manager Dr Sam Jones explained: “The global fresh fruit trade and the ability of the larvae to hide fruit undetected until after transportation are both helping facilitate the increasing distribution of this pest. Given its very rapid spread thoughout the UK and the rest of Europe in recent years we decided it was important to invest resources into a product that will help fruit farmers and importers monitor and trap these insects.

“We are delighted that our products performed so well in the trials and we are now able to offer our formulation to customers.”

Drosophila suzukii infests and develops in undamaged, ripening fruit. Fruits become susceptible to the insect as they start to change colour which coincides with softening skins and higher sugar levels. It infests a wide range of fruit crops, including grapes, as well as an increasing number of wild fruits. D. suzukii is an economically damaging pest because the females are able to infest thin-skinned fruits before harvest and the larvae destroy the fruit pulp by feeding.