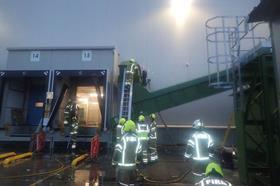 A fire at Ocado’s automated distribution centre in Erith has forced the company to cancel some orders.

Ocado said “a small fire” began outside the building in a skip containing waste packaging, at 7pm last night, with the London Fire Brigade (LFB) managing to extinguish it three hours later.

LFB said 25 firefighters and four engines were called out to the scene, with damage reported to a conveyor belt and an external motor. Firefighters said one sprinkler at the facility had helped suppress the fire.

Ocado stated its packing robots, dubbed 'material handling equipment', were not affected by the fire, but as the facility was evacuated, some orders had to be cancelled.

The company stated: “We sincerely apologise to those customers affected for the inconvenience this causes. All customers will be offered a re-booking for tomorrow. The fire suppression measures in place performed as intended and the fire did not spread. We would like to thank the London Fire Brigade for their assistance.

It’s the second blaze this year for the online retailer, whose Andover depot was destroyed by fire in February.

A London Fire Brigade spokesperson said about the fire last night: “This incident highlights the clear benefits of sprinklers to businesses andwe would urge all companies and business owners to install them.

“As well as limiting fire damage and being potentially life saving devices, sprinklers and other fire suppression systems help with business continuity by minimising disruption and allowing businesses to get back to normal as soon as possible.”