Pesticide 'not seen in 13 years' found in Jersey water 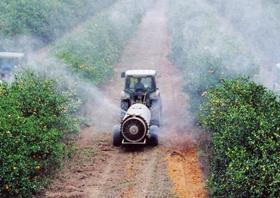 A pesticide believed not to have been used in Jersey for 13 years has been found in a stream that feeds drinking water reservoirs.

Oxadixyl, which was used to control potato blight between 1991 and 2003, was found in routine tests.

She added: 'It is not unusual for us to occasionally identify pesticides in stream water. In these instances, it is standard practice for us to take that stream out of service until the substance has disappeared.

'What is unusual with Oxadixyl is that it is still present even though it hasn't been used in Jersey for 13 years. We'll need to look at other ways of removing it through treatment.'

Oxadixyl is now banned from use - the manufacturers decided not to renew its licensing in 2003, meaning that its license lapsed.

The new traces have been found after Jersey Water started using a new testing laboratory in the UK.

Jersey's environment minister Steve Luce said he would consider bringing in measures to regulate pesticide use: 'These test results are unacceptable, and I think the time has come to consider tougher measures,' he added.