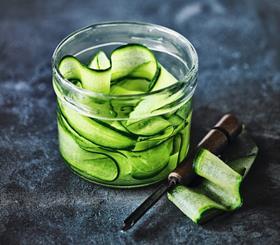 The trend for pickling foods has seen a rise in popularity since lockdown, boosting veg sales at Waitrose.

Known for their gut health properties, pickled foods like onions, beetroot and gherkins have been a mainstay of British cuisine for decades. Additionally, fermented foods from around the world, including sauerkraut and kimchi also have their place in store cupboards across the UK.

Now, this method of preserving food has become a lockdown hobby for foodies.

According to the supermarket, 24 per cent of the population would like to improve their gut health and the probiotics found in fermented and pickled foods are seen as an important factor in supporting the digestive system.

Alions Oakervee, food editor at Waitrose, said: 'Pickling isn’t just about preserving foods, although that is a wonderful benefit; vegetables and fruits will last a couple of weeks in pickling liquor in the fridge.

'Pickled ingredients add an unmistakable crunch, bite and acidity to all kinds of dishes - from curries to sandwiches. The sharp tang of vinegar lends itself to a myriad of different ingredients, and the scope to add flavour and texture to dishes with pickled fruit and vegetables is huge.'