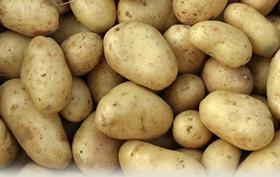 Potato headlines have been dominated by the sustained period of heavy rain from autumn and throughout winter that made life very difficult for growers. In a sign of the times, Tesco put blue labels on bags of potatoes grown in quagmire conditions, with size and appearance affected.

According to AHDB’s latest report, the expected yield is around 5.19m tonnes, about average, which is a testament to growers in some of the worst conditions they’ve ever faced. AH Worth’s Duncan Worth told FPJ in December that the amount of rain he experienced was a “once in a lifetime occurrence”, with other growers in the north and east suffering from extreme rain too.

While growers struggled to lift potatoes, sales of chilled potatoes also struggled in 2019 with volumes falling by six per cent in the year up to August 2019. This was largely down to a decline in new and baby potato sales, according to AHDB’s Zoe Avison, which tend to feature more in salads. With the weather more temperate, salad sales also saw a slowdown.

But with the rain clearing up, and a new decade begun, potato growers have reasons to be cheerful; having done a stellar job lifting the crop in tough conditions, there are signs that shoppers are re-engaging with the category.

The stage is set for the category to push on in 2020, with a new campaign being planned by AHDB to start in April, after its four-year project reaches completion.

AHDB’s senior marketing manager Stu Baker says the principle aim of the current campaign was to halt volume decline, which they’ve achieved. Between 2015 and 2018 fresh potato sales rose from 2.1m to 2.2m tonnes. “Over the course of the past three years, sales in fresh have gone up 2.2 per cent,” Baker adds. “From my perception it’s been a very positive campaign.”

Baker says the idea was to promote the vegetables’ positive attributes rather than push back against perceptions of them as not being part of a healthy diet, a sore point for many, who feel its exclusion from the government’s 5-a-day list is grossly unjust. “We were emphasising potatoes’ versatility and convenience, its speed of preparation, and something like carbohydrates became a secondary issue.”

Pushing back is what the AHDB is doing with a new cross-sector promo however, which aims to recapture the “ordinary qualities” of food, as Baker puts it, in a time of abundant misinformation, exaggeration and hype in the food and diet industry.

The campaign will feature short videos that highlight the ways in which we are vulnerable to misinformation about diets, particularly online, with the first one due for release shortly, featuring a teenage girl reading exaggerated claims online.

“We have only created one full video so far. The campaign is about looking at creating content that demonstrates the confusion and misinformation around some advertising online using the example of social media and social media content, which sometimes pushes confusing messages or promotes things like fat-burning pills, for example,” Baker says.

“The campaign is almost trying to reinforce the almost bog-standard nature of good food, that they are enough for a healthy diet. They are nutritious and natural foods,” Baker says.

In an era during which fake news has become so problematic, is this agriculture’s attempt to set things straight? Baker says it’s less grandiose than that, and focused on raising awareness. “It’s more about the extreme dieting and meal replacements which you’re not sure what’s in them.”

Fittingly for a product that modern diet gurus often like to denigrate, AHDB’s new video ends with jacket potato meal. “We’ll see how the result goes for this initial video. The plan is to develop further content,” Baker adds.