Renewed confidence in potato sector ahead of BP2019 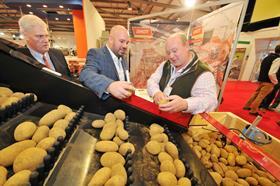 Potato trade show BP2019 will welcome a record number of exhibitors to Harrogate later this month, reflecting “renewed confidence” in the sector, according the event’s director.

“This is also reflected in show bookings, with fresh sector companies prominent among the one in five exhibitors who are new to the long-running show.

“Most major merchants and packers, accounting for the majority of the UK fresh potato movements by value and volume, are again attending, together with a variety of fast-growing niche players in the fresh sector.”

Official industry partners, the British Potato Trade Association and the Fresh Potato Suppliers Association, will also be in attendance, based in the trade and innovation hub “to discuss key industry issues on an informal basis”.

The event’s two-day seminar and open meeting programme will include an NFU-led session on the latest potato-specific challenges and opportunities of Brexit, while for the first time, AHDB plans to unveil its production estimate live on the second day of the show. The seminar will include data on planted area, yield, varieties, imports and exports.

“These trade-related aspects of the show add to the field-to-fork, whole-industry coverage that has become a hallmark of the event,” said Wellbeloved.

“Other crop sectors generally have separate production-orientated and post-farm events, whereas British Potato events have evolved to reflect the vertical integration of the potato industry with extensive handling and packaging exhibits alongside agronomic displays.”