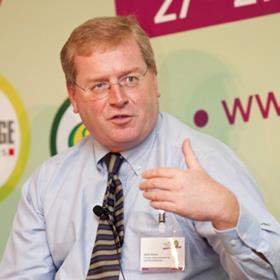 The saying goes that there is nothing new in the world, and in many cases whatever happens, we have seen at least something like it before, somewhere in the past.

The fresh produce sector is currently faced with a number of huge macro type challenges that include the impact of climate change, the role of ethical trade, the effective use of scarce resources, the need to grow fruits and vegetables in an environmentally sensitive and responsible manner, to name just a few.

It might be argued that these sort of issues have always been around the horticultural, and indeed other sectors of the agri food industry, too. What has bought them all into a much sharper focus has been the sheer number of factors that all seem to be coming together at one time. This is putting pressure on businesses all around the world to do things “better” in some way than in the past.

Water usage is firmly on the agenda at the moment and is being seen as the next big challenge to tackle, after carbon and greenhouse gas emissions. Agriculture is a big user of water and so often the focus of attention. Yet, in parts of East Africa, Israel and in areas such as California, scarcity of water has always been an issue.

There have always been smart R & D projects in place to try and solve the problems this can cause. Now we are seeing the issue of water usage being talked about in many parts of the world ranging from SE England, to Brazil, parts of Asia and the Former Soviet Union.

The move towards ethical based trade has also been a key driver in recent years with many key companies in the supply chain looking to demonstrate their commitment to high levels of corporate social responsibility. Indeed, the EU is now looking to make this a mandatory requirement of business.

We have reached a stage now however that they cannot be ignored and only mid to long term investment in new science, R & D and technology can really bring about the solutions that are needed.

Much of what is happening is being driven by changing consumer demands, be they in the UK, Asia or Africa where an increasing proportion of them are showing interest in these issues and impacts on the environment in its broadest sense.

Such is the scale of the issues we face in this “perfect storm” that it is doubtful if single businesses and organisations can solve them alone. In some cases, we have known about these issues for some time already. In some cases, the answers to complex problems might be at least partly known. Collaborative efforts will be required to levels not seen in the past and will re fine our understanding of the term “co operation in the supply chain”. And to really get these issues dealt with, involving the consumer in the debate, solutions and implementation of these will be increasingly important.