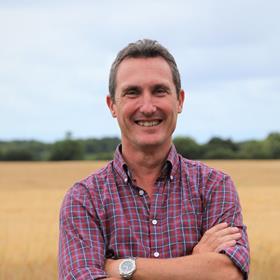 Talking about the lengthy process of developing seed potatoes before planting as a main crop, it’s ironic that much of it will end up being called “fast food”. But there’s nothing fast about seed potatoes. Breeding aside, it takes several years to go from a mini-tuber to final planting for ware potatoes.

Tell that to any consumer tucking into a bag of McCoy’s crisps or enjoying fish and chips by the seaside though. Behind every chip from a chippy, or new potato in a salad lies several years of preparation, beginning with a nuclear stock in Scotland, and it’s guys like Paul Wood, managing director of Meijer Seed Potato, that make it happen.

“We order them by the mini-tuber one potato at a time, whether 5,000, or 100,000, whatever you want to order, predicting what your market is going to be in five years time,” Wood says.

With those mini-tubers, Wood’s contracted growers then multiply the number of seeds over two years, at which point they will deliver the seeds to a ware potato grower, who is the last stage before delivery to UK supermarkets, restaurants, processors, and the myriad ways in which Britain eats its beloved potatoes. “It’s all about knowing the market, the total volume of the market you’re trying to hit and tailoring your volumes,” says Wood.

Indeed, as one of the big players in the UK seed potato scene, many recognisable brands and supermarket shelves are stocked with Meijer variety potatoes. From KP and McCoy’s to the major retailers, Meijer varieties go into many of Britain’s favourite foods.

The Meijer brand is in fact new on these shores, having emerged out of a former guise, Potato Innovations, in 2015, with Wood taking the helm of the business that year. The company is a British arm of Holland’s Meijer seed brand, itself part of the Meijer family legacy, which dates back to 1920. Meijer UK has exclusive rights to market Meijer varieties in Britain and Ireland, with its breeding programme based at a new state-of-the-art facility in Rilland, Holland.

Wood sells around 30,000 tonnes of seed potatoes each year, marketing 30 Meijer varieties, grown from over 50 farmers from Scotland down to Cornwall. It’s an extensive operation, managed by nine staff from their Norfolk headquarters, a few minutes drive from the North Sea.

Meijer potatoes are used across the food chain with core areas being chipping, frying, crisping and table potatoes, each segment having a wide array of varieties best suited for them. The latter has struggled recently, however, as table potatoes fall down the pecking order of home cooking ingredients in an age of Thai meal kits and Ottolenghi recipes. While AHDB reports a recovery in volume sales, last year’s supermarket sales saw another decline of four per cent in value over the past 12 months.

“When I started there were 25,000 farmers growing potatoes, but now it’s about 1,500,” Wood adds. He points to the success of sweet potatoes in pushing a health message as an example of how potatoes can get back into the shopping basket.

“There’s virtually no difference between them whatsoever, yet somehow the marketing of sweet potatoes has just been fantastic. That’s the sort of thing as an industry we have as a challenge. We are very much behind the AHDB’s Grow Your Own Potato programme in schools. Half a million kids they got to this year, it’s phenomenal.”

Raising consumption pales in comparison to the Brexit challenge however. For most people, deal or no deal is a political abstraction to do with backstop agreements and political manoeuvring. For Wood, it’s a matter of immediate consequences, as Europe rejects all seed potato imports from non-member states, which the UK will become on 1 November if Boris Johnson and co fail to strike a withdrawal agreement with Europe.

“We use Europe as a buffer for what we produce. The issue is with exports to Europe after a no-deal Brexit. At this point they don’t accept any seed exports,” Wood explains.

“On 31 October all exports will stop. I’ve got an ongoing export to Ireland to a factory which I won’t be able to do. I have a thousand tonnes going to Ireland that on 31 October I won’t be able to do because of a piece of paper; it’s just ridiculous. It’s a real issue, it means I will have a thousand tonnes here that I have to pay a grower for, with no seller.”

Wood says Brexit raises further unnecessary complications, citing mandatory plant DUS (distinct, uniform, and stable) tests as another headache. Currently, DUS-certified seed potatoes are valid across Europe. When Britain leaves the EU, however, there is talk of seed potatoes having to go through a separate British DUS certification process.

“You will spend two years putting it through the DUS in Britain for them to tell you exactly the same as you already know, at which point you’re maybe four years behind EU competitors and then you have to trial it to see whether it grows in the UK or not,” Wood says. “That puts us at a disadvantage going forward because we’ll be way behind our competitors.

“We’re not worried about tariffs, because it’s just a value in money. If it makes product in the first year two-and-a-half per cent more expensive, then we can deal with it, but at this point in time we can’t do a thing. We will have tonnage here but what will we do with it?”

Any glut of seed potatoes in the UK would have the knock-on effect of collapsing prices which would then make farmers pull out of the market, further depleting UK food self-sufficiency, something which NFU president Minette Batters has recently rallied against.

“You’re always looking for new people, relationships go up and down. Sometimes a variety might not suit a supermarket anymore, they tell you that you have three years, so you have to wind it down to zero, and you have to get it out of your system or find a new market, or export. You have got to get rid of it somewhere.”