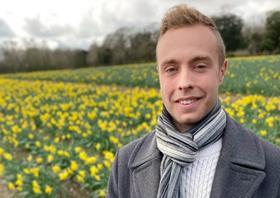 Self-driving mini tractors could offer a valuable new tool for growers and farmers, a tech specialist has claimed.

Kernow Robotics, which was founded in 2019 by Ben Green, is working on a new machine that could ease the burden on human farm labour at a time of worker shortages.

Working with Agri-Tech Cornwall, Green secured a £7,200 grant to create a self-driving agricultural robot, and he started by creating a mobile platform known as a mini tractor that could house tools such as precision spraying and weeding technology.

Green said he hopes the first prototype will be up and running by the end of April, with the machine ready to hit the commercial market in three years, priced at a likely £10,000. “We are looking to form partnerships with local producers and key parties – not necessarily to sell the product but to work together while generating some interest about what the robots can do and set about solving some of these problems,” he explained.

The robot isn’t necessarily designed to replace jobs, but to supplement them, according to Green. “For example, you wouldn’t pay someone to walk around a field scaring crows all day but with a mobile robot there’s no cost.”

The mini tractor will have interchangeable tools and Green plans to offer the whole service as a package, in which the farmer will contract the Kernow Robotics team to bring several of the robots to a field and oversee the process, without the farmer needing to be there or having to shell out for the robot itself.

“Practices like ploughing are energy intensive and you need a big tractor, but for precision spraying you can have a small robot driving over every row of vegetables with a camera that specifically identifies a weed and has a nozzle to spray it,” Green explained. “Chemical usage could be cut down astronomically to more sustainable levels. That’s the exciting bit for us because we’re enabling brand new schools of thought on how we can approach these barriers that have always seemed insurmountable.”

Green previously worked with Fieldwork Robotics at the University of Plymouth, and says he saw potential solutions to the labour issue. Beginning with local challenges, Kernow Robotics will focus on how the machines can help Cornish daffodil farmers before looking into options on livestock farms. 'I’m really focusing on local problems and helping local farmers – I hope to make a real difference to the future of Cornish farming,” he added.