Shipping costs to Jersey and Guernsey set to rise 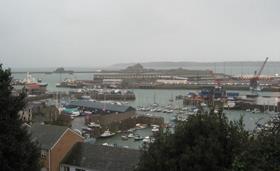 The cost of commercial shipping to Jersey and Guernsey is set to rise because of new EU rules governing ships' emissions.

Although the islands are not in the EU, ships operating near EU coasts must comply with tighter rules from January.

The new regulations are designed to lower the amount of sulphur emitted into the atmosphere, BBC News reports. This is achieved by using more expensive fuel or by fitting so-called exhaust 'scrubbers'.

Condor Ferries, which operates all ferries to the Channel Islands, told BBC News that its high-speed car and passenger vessels already complied with the new rules.

However, the company's freight vessels, the Commodore Clipper and Commodore Goodwill, will switch fuel in January until they have scrubbers fitted in the autumn.

The cleaner fuel, marine gas oil, is 40 per cent more expensive than the intermediate fuel oil it replaces.

Martin Langlois, general manager of Ferryspeed, a freight company in Guernsey, told the news outlet that complying with the rules would apply yet more pressure on business.