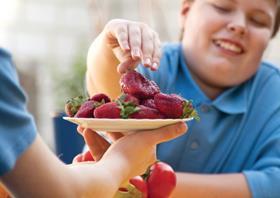 A government subsidy would improve fruit and veg intake by as much as 15 per cent, economists have claimed.

High fixed costs in the supply chain means consumers buy 15 per cent less fruit and vegetables, researchers at the University of Warwick believe, and they say introducing a subsidy to counteract the price distortion and reduce the cost of fruit and vegetables will change diets in a way that is not only healthier, but also more in line with what consumers like to eat.

Published in Science Advances, the study by economists at the University of Warwick set out to quantify distortions in the price of fruit and vegetables due to market imperfections, and their impact on our diets.

The economists found that fixed costs in the supply chain play a much larger role in the price of fruit and vegetables than in prices of other foods, distorting the relative price by at least 40 per cent.

These high prices imply that consumers on average buy 15 per cent less fruit and vegetables than they would have if these sold at marginal cost. This underconsumption is due to a market imperfection: the fixed costs prevent the ‘invisible hand’ of the market from allocating more fruits and vegetables to consumers, which both they and the producers of these product would prefer.

The 15 per cent underconsumption of fruits and vegetables due to retail market imperfections accounts for a third of the gap between the average amounts of fruit and vegetables consumed and the recommended intake.

'Something wrong with the market'

Professor Thijs van Rens from the Department of Economics, one of the authors of the article, also leads the Warwick Obesity Network, which develops evidence-based policy and practitioner briefs supporting a national strategy against obesity. He said: “The food retail market is very competitive, so if there weren’t any fixed costs you would expect food to be sold close to marginal cost. And the fact that they are not affects diets.

“A higher price of any product means that people buy less of it. The question is, by how much? We find that if the market were working correctly, consumers would buy 15 per cent more fruit and vegetables than they currently do, which would constitute a huge gain for public health.

“There is something wrong with the market, which is that there’s a high fixed cost in the provision of fruits and vegetables. The effect of that is that the prices are too high, and consumption too low. What is worse: the effect is stronger when demand is low. And demand happens to be low where people are poor. So this market failure not only makes us all unhealthier, but it increases health inequality as well.”

The shelf price of a product incorporates fixed costs associated with its manufacture and distribution, the researchers say. Fruit and vegetables have particularly high fixed costs as they are perishable products which requires them to be restocked more frequently. This drives up the price of fresh produce compared to other, unhealthier, foods, which are sold close to their marginal cost.

To investigate the impact this has on consumers’ fruit and vegetable purchasing, the economists modelled the consumption behaviour of households with different incomes, living in neighbourhoods with different average income levels.

They used data on food purchases in the US from the NielsenIQ Homescan dataset, which contains detailed information about quantities and prices of food purchases between 2004-2014 from about 60,000 households, to determine how much what a consumer pays for fruit and vegetables varies due to their preferences over quantities and qualities of fruits and vegetables, and how much is due to these fixed costs.

The economists argue for a subsidy for fruit and vegetables as high as 25 per cent to increase consumption of fruit and vegetables and make our diets healthier. It is estimated that UK supermarkets sold around £10.4 billion of fresh produce in 2017, so they estimate that funding a subsidy would cost government £2.5 billion per year.

The NHS is estimated to have spent £6.1 billion on overweight and obesity-related ill-health in 2014-15 and will potentially spend £9.7 billion by 2050, while the overall cost of obesity to wider society is estimated at £27 billion.

Van Rens added: “Taxing and subsidising to tackle obesity has been politically infeasible for some time but shouldn’t be any longer. Obesity is a massive public health problem and we’re not going to solve it with tweaks. We need to bring out the big guns: subsidies and taxes. A subsidy is in some ways the most market-based, least invasive intervention you can think of. Anything less than that is just giving friendly advice and will not get us where we need to be.

“There is no debate that fruit and vegetable consumption would increase if you subsidise it. The main contribution of our research is to show that the market is already so distorted that this subsidy would benefit every single consumer in the economy.”