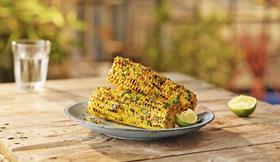 Waitrose has reported a 30 per cent increase in sales of fresh sweetcorn as the nation looks to lead a healthier lifestyle and brighten up its plates with more vegetables.

The supermarket said the rise in demand is reflected in searches on Waitrose.com for sweetcorn recipes, which have increased by 169 per cent this year with shoppers seeking out the versatile veg for barbecues and brunches as a healthy and meat-free option. The long, hot spring and summer are likely to have been significant contributing factors to the sales uplift.

In July the FPJ Big 50 Products guide reported that volume sales of sweetcorn had risen 6.5 per cent in the past year [Kantar, 52 w/e 19 April], though price promotions had suppressed value sales.

Lucy Broughton, Waitrose sweetcorn buyer, said: “Throughout this year we’ve seen shoppers looking to increase their intake of veg and super sweetcorn has become recognised as a fantastically versatile vegetable which can be used from breakfasts to barbecues. With more shoppers seeking out British-grown produce and British sweetcorn currently in season, it really is having its moment in the sun.”

Waitrose's Essential British Sweetcorn is supplied by Barfoots, and is currently in season.

Along with shoppers keen to increase their veg intake, a combination of spending more time in the kitchen creating dishes, a rise in popularity of vegan and veggie diets and the favourable weather this summer has helped demand for sweetcorn soar, according to the supermarket. A recent report from Waitrose found that 26 per cent of shoppers said they'd been cooking more unusual meals and trying different cuisines or ingredients, with sweetcorn featuring prominently in recipes for elaborate Mexican-style brunches and lunches in the form of fritters, slaw and salsa.

British veg has also seeing a spike in searches, up 227 per cent at Waitrose, as the nation looks to support British producers in the current climate.