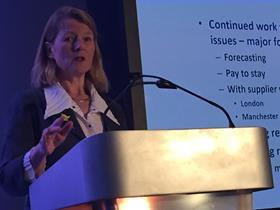 Groceries Code Adjudicator Christine Taconhas announced she will step down from the role at the end of this week, handing over to successor Mark White.

Tacon, who was the inaugural adjudicator, setting up the organisation seven years ago and establishing it as the arbiter of supermarket-supplier relations, was due to step down earlier this year but agreed to stay on to oversee issues arising out of the Covid pandemic.

However as no specific Covid-related issues have been reported, she said it was now the right time to step aside.

'As it is now over six months since supply arrangements had to be reviewed and revised to ensure essential groceries reached the supermarket shelves at the onset of the lockdown I would not expect any supplier now to raise an issue based on those actions. As a result I can now step down and formally hand over to Mark.'

Tacon said the response from both retailers and suppliers to the significant challenge of the Covid emergency had demonstrated that the code provided the flexibility both parties needed to maintain the supply of groceries to consumers in all circumstances.

'I am aware that sales of certain essential products appear to be accelerating again but I am confident this development will be well handled with proven, effective processes and ways of working established,' she added.

The GCA’s Annual Reports have shown significant improvement in the groceries sector throughout Tacon's seven years in office, with suppliers reporting year-on-year improvements in retailer behaviour.

'I am very proud of the progress we have achieved working together in the sector since I became GCA in June 2013 and I will continue to watch how all the retailers maintain good levels of compliance under Mark White’s leadership,' she concluded. 'I wish him all the best in what has for me been a very fulfilling role.'

In August Tacon discussed her time as adjudicator as well as her wider career in a special episode of FPJ Stories, which you can see below.