Tesco gets on board with seaweed trend 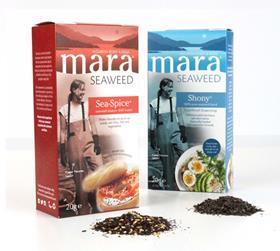 Tesco is tapping into the trend of marine ingredients with the launch of a new seaweed line.

The supermarket has launched sachets of three of Scottish food producer Mara Seaweed’s ground seaweed products, aimed at consumers wanting to cut down on their salt intake.

Seaweed is on average 85 per cent lower in sodium than salt, and is also rich in iodine, potassium, magnesium, calcium, iron and zinc, according to Tesco.

The seaweed flakes go on sale this week in over 550 stores, sold in 20g packets at £2.99 each. The three flavours are Shony, Sea-Spice and a Mara Variety Pack.

The retailer’s herbs and spices buyer Angus McSporran said: “Using seaweed as a seasoning is not only a great way to cut down on your sodium intake but one that can add a real ‘wow’ factor when added to other foods.

“It is already hugely popular in the Far East, where it has been part of the national diet as a treat as well as a wonderful-tasting food enhancer. We think it will appeal to food lovers seeking a new taste thrill. It has a subtle salty taste and which has been compared to umami – the fifth basic taste we can sense after salt, sweet, sour and bitter.”

Mara Seaweed came through Tesco’s Incubator programme, which helps up-and-coming brands and has been responsible for the likes of Brew Dog, Fever Tree and Graze.