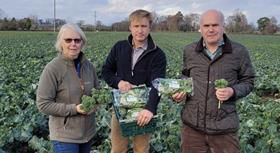 A Herefordshire grower has produced a rare out-of-season Tenderstem broccoli crop in time for Christmas.

The UK season typically ends in November, but grower AS Green has produced 40 tonnes for Tesco, which the retailer said will last until Christmas.

Demand for Tenderstem during the festive season soars by around 45 per cent on a regular shopping week, Tesco pointed out, and the move has a sustainability benefit as it means the supermarket won’t have to import during that time from Kenya or Spain.

Tenderstem is seeing sales growth of 40 per cent year on year at Tesco, while demand for regular broccoli is growing at around 10 per cent.

The Cornwall-grown Tenderstem broccoli goes on sale at Tesco stores across the UK this week and will cost £1.50 for a 200g pack and £2.25 for a 330g pack.

Tesco speciality vegetables buyer James Malham said: “It’s very rare indeed to get UK-grown Tenderstem broccoli for Christmas. Over the last few years we’ve seen a real increase in shoppers buying it during the festive period and it’s now considered a treat to join carrots, parsnips, cauliflower and roasties on the Christmas dinner table. People love it because it’s easy to prepare plus it’s packed with goodness.

“As a result of that demand our grower has pulled out all the stops to get us the UK-grown variety and has switched production to the warmer Cornwall micro-climate in order to do so.”

Grower AS Green, based near Malvern, grew the crop at its site near St. Michael’s Mount in Cornwall. A combination of growing techniques using the Gulf Stream that passes across Cornwall and the mild autumn this year made the achievement possible.

The company's Caroline Green said: “We also grow Tenderstem broccoli at our main site in Herefordshire but have rented land in Cornwall in order to try to extend the British growing season which we’ve achieved this year. This is the start of a three to four year trial and we are still learning as we go but the early signs have been very good.

“We decided to grow in Cornwall as it has a warmer climate with milder night-time temperatures and a better growing soil for this crop. In the past we’ve been able to grow it until 20 November, but our aim was to reach Christmas. We put a lot of science into picking the right site in order to make this happen.

“Our aim now is to try to extend the Tenderstem season so we can grow from May right through till Christmas.”