UK foodservice will bounce back 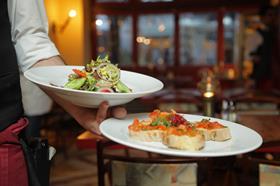 The UK foodservice sector, which has lost 75 per cent of its income over the last six months, will bounce back from coronavirus, Peter Backman of Foodservice Consultancy reassured FPJ Live delegates on Tuesday (6 October).

Speaking as pubs and restaurants faced 10pm curfews, local restrictions and a possible second nationwide lockdown in the run-up to Christmas, Backman said there was still a lot of “very bumpy ground” ahead for the sector, but that it would ultimately recover.

“Foodservice sector business sales to consumers for the last six months (April-September) is about £21bn less than its normal takings for the period – that’s 75 per cent down,” Backman revealed. “The sector has lost a great big chunk of business. That’s a great big hole that the industry is never going to make up.

“But even if the industry were to be decimated over the next two to three years, which I don’t think it will, it would come back because people want to go out, hospitals and schools have to serve food.”

Backman acknowledged that the impact of the government’s August Eat Out to Help Out scheme had been “very positive” for the industry, but that today, in October, trading levels are back to where they were before the scheme, or even below.

“The impact of the eat-out scheme was very positive, it allowed customers to come through door and allowed restaurants to bring back staff. Unfortunately, since then we’ve had this second lockdown which has chopped the legs out from under the Eat Out to Help Out scheme,” he said. “You’d expect business to be low now in October, which is a low month. But it is very disappointing that it has gone down substantially from the high of the [August] scheme. It is a big disappointment.”

Backman told FPJ Live that coronavirus has accelerated inevitable closures within the UK restaurant segment, which has been suffering from over-capacity due to over-investment.

“But we’ve had far too many closures,” he said. “25 per cent of the UK restaurant estate has been removed and will only come back over a period of years.”

“We’ve seen the removal of businesses, some of which were failing, many of which weren’t,” Backman said. “The industry has been cleared and is ready for a resurgence when the time is right, whether that’s next year or the year after, or the year after that. I am very confident that when restaurants, delivery and hotels come back they will all be doing good stuff.”