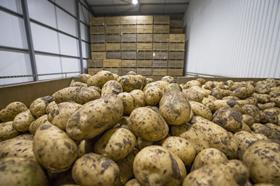 Almost half of the Scottish potato crop was still in grower-held stores at the end of January, AHDB estimates indicate.

The total volume of potatoes in British growers' stores was 2.11Mt, 39 per cent of total production, the levy body said. This is 47,400t lower than in January 2020, but 40,860t higher than the five-year average. Of this, 61 per cent is already sold, either on pre-season contracts or as a forward sale.

Scotland accounted for 29 per cent (608.700t) of what remained in grower ownership at the end of January, representing almost half of total Scottish potato production still in store and more than at the same point last year.

AHDB senior analyst for potatoes,Alice Bailey, said: “While there was a slight uplift in production in Scotland, much of the Scottish area is grown for seed production. Therefore, slower seed sales may account for some of this volume. There have been reports that many growers delayed their seed orders this year while deciding what to plant, seemingly awaiting some positive news for the industry as the coronavirus story pans out.”

Growers' decisions on what to plant this spring are based on a view of what market conditions might be from late summer onwards, AHDB explained. While those growing for the domestic ware market face uncertainty due to demand, those growing seed face political uncertainty around exports to the EU.

AHDB’s head of potato export trade development, Patrick Hughes, has been working with Scottish and UK governments to supply evidence to those in negotiations. “The UK and the EU continue to discuss equivalence for seed potatoes and we understand that progress is being made,' he explained. 'As things stand, it is very unlikely that a future trade deal in seed potatoes will be in place prior to seed crop planting for the 2021 season.

“This leaves the sector facing difficult decisions around their planting arrangements for 2021. Seed potatoes specifically scheduled for EU export will either not be planted or will be significantly reduced and a greater emphasis placed on supplying the domestic or alternative international markets.”

Potatoes have seen strong performance at supermarkets in the last quarter, with volume sales up 13.9 per cent year on year, according to Kantar. Meanwhile there is hope that a summer with fewer restrictions on hospitality businesses and a UK ‘staycation’ boom could drive late-season demand.

Bailey said that with the bulk of any uplift coming as the market switches from old to new-season crop, the data suggested what is currently in store will cover any demand rise. “Following the government’s release of the roadmap out of lockdown, there is now a light at the end of the tunnel for many within the industry,' she added.

'A return of hospitality and the foodservice sector in the coming months are providing hope for increased trade. With stocks slightly higher than previous years, it is likely that growers have the volume of potatoes to cover it – assuming that the quality holds.”