Where next for the UK-US trade deal? 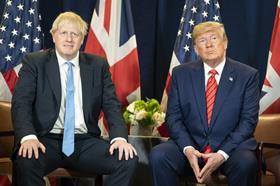 Besides trade negotiations, Boris Johnson (left) and Donald Trump have a lot on their plates at the moment Photo: The White House/Flickr

There hasn’t been a fresh produce supplier or farm in the UK or the US that hasn’t been impacted by Covid-19 in some way. But as the UK gradually emerges from lockdown, and at the same time desperately looks to avoid a second spike, the big-ticket items that the fresh produce sector needs to address won’t go away.

These include developing sustainable and secure supply chains; understanding what is happening in local and world markets during these unprecedented times; understanding the direction of travel in terms of international trade talks; and having a good feel for both customer and consumer behaviour, and how this will change over the next 12 months and beyond.

In terms of Brexit, the threat of No Deal remains. Boris Johnson has said he will walk away from talks if substantial progress hasn’t been achieved by the summer – which is now – and take the consequences of No Deal. The European Commission say they still want to talk, but the UK is backsliding on agreements made earlier in the year. This will go down to the wire at the end of the year.

Johnson’s apparent bravado might be tempered by widespread predictions that No Deal could be potentially disastrous for the UK economy, which is already facing a huge downturn after Covid-19, with negative GDP growth and high unemployment. There is only so much the economy, as well as the electorate, can take.

So, where does this leave the UK–US Free Trade Agreement? Talks have started, and this is a good sign, but with packed agendas for Johnson (dealing with impact of Covid-19 and then Brexit) and President Trump (who must also tackle the economic impact of coronavirus and then has the small matter of an election), how much time can be dedicated to hashing out a trade deal? No doubt the civil servants on both sides will be working away on this, but can such a task really be achieved in the short term?

A US deal does represent a significant opportunity for the whole UK economy, potentially creating a substantial increase in trade with the US of approximately £15.3 billion in the long run. This would deliver a £1.8 billion boost to UK workers’ wages, as well as lowering prices on key consumer goods imported from the US.

What you can be sure of is that agriculture and food will almost certainly be a sticking point. The UK is worried about a free-trade deal opening opportunities for the US to sell GM soybeans, chlorinated chicken and hormone-treated beef to the UK. Farmers in the UK are worried that agriculture will be thrown under the bus to get concessions in other areas of the negotiations, and it would be brave of a UK supermarket to boldly claim to its customers: “Our chicken comes from the US”.

The US produce sector could get caught up in this – exports to the UK (except for nuts) have all fallen recently for a variety of reasons. In some cases, this is because of EU non-tariff barriers, but it is also because US shippers have found new markets in southeast Asia and the Far East.

The US has in the past been a supplier of a range of produce to the UK. This includes apples, pears, grapes, strawberries, asparagus, citrus, blueberries, some salad crops and stonefruit. Given better market access, will US produce exporters begin to re-examine the UK opportunity? With other global markets also under pressure, maybe they will, but they will also need to rebuild confidence with UK importers, retailers and consumers alike.

Our experience shows that just having market access to a particular country does not mean exporters immediately rush to that market. Has the US supplied the UK in the past? Yes. Have the leading growers and shippers got the technical and commercial ability to deal with the UK? Yes. Does that mean they will look to the UK market at a time when, post-Covid-19, British importers and retailers might be looking to shorten supply chains? That’s less certain.

At the same time, UK agriculture and horticulture are still looking to boost domestic productivity, not least through the use of various forms of agritech. The best of the best in the US might look again at the UK market, but this is by no means a given.

Sealing a UK-US Free Trade Deal will almost certainly take longer than the much-heralded “quick and outstanding deal” that Trump has promised. He might not even be around by the end of the year to see this through. Trade deals normally take several years to negotiate, and even then, there is a longer implementation period. “Outstanding” for who, you wonder? What does seem sure is that there is some way to go on this and there is plenty of water to flow under the bridge before a deal is finalised.

John Giles is a divisional director with Promar International, the value chain consulting arm of Genus plc. He has worked on fresh produce marketing assignments in over 60 countries around the world and this includes a good deal of work for clients in the US, assessing international markets in the UK, the rest of the EU, Russia, the Middle East and southeast Asia. He is also the current chair of the annual City Food Lecture and can be contacted atjohn.giles@genusplc.com.