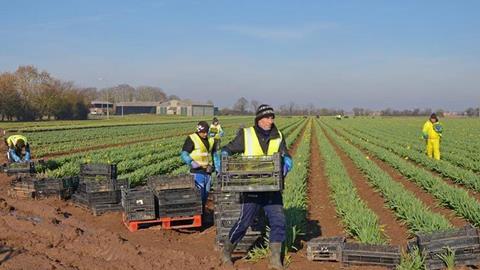 Millions of pounds of fruit and vegetables have been wasted as a direct result of workforce shortages, according to a new NFU survey.

The study by the farmers’ union indicates that the 2022 fruit and vegetable harvest has been significantly impacted because there aren’t enough people to pick the crops.

It indicates that as much as £22 million worth of fruit and vegetables has been wasted directly because of workforce shortages in the first half of 2022 alone. As the survey represents around a third of the UK horticulture sector, the NFU estimates the overall value of food wasted adds up to more than £60 million.

The NFU said the results demonstrate the detrimental impact workforce shortages are having on the food and farming sector, resulting in significant crop losses at a time when the country is experiencing the worst cost-of-living crisis in generations.

The survey also showed that 40 per cent of respondents are suffering crop losses as a result of labour shortages, with 56 per cent reporting a fall in production – averaging a 19 per cent reduction across the businesses.

On average for the 2022 season so far, businesses are experiencing worker shortages of 14 per cent, a figure that is based on recruitment and does not factor in the added effects of early leavers.

NFU deputy president Tom Bradshaw said: “It’s nothing short of a travesty that quality, nutritious food is being wasted at a time when families across the country are already struggling to make ends meet because of soaring living costs.

“At the same time, the prolonged dry weather and record temperatures have created a really challenging growing environment for our fruit and veg. Every crop is valuable – to the farm business and to the people whose plates they fill. We simply can’t afford to be leaving food unpicked.

“With the demand on the Seasonal Workers Scheme expected to increase again next year, it’s vital the scheme has the capacity to facilitate the people the sector needs to pick, pack and process the country’s fruit and vegetables. This means increasing the number of visas available to meet the sector’s needs and expanding it to a minimum of a five-year rolling scheme to enable growers to have confidence to invest in their businesses – particularly given growth in the horticultural sector is a government ambition set out in the National Food Strategy.

“This survey has demonstrated just how crucial it is for fruit and veg growers to have access to the workforce they need. Expanding the Seasonal Workers Scheme will play a vital role in enabling that access and ensuring we don’t see this devastating level of food waste next year.”