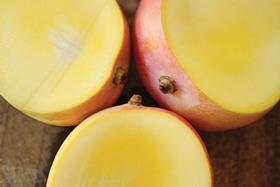 New Zealand consumers could be facing higher prices for their tropical fruits this summer due to a Covid-affected supply chain.

According to a report from RNZ, the pandemic has reduced the number of ships and flights arriving giving exporters view options to supply New Zealand.

Jerry Prendergast, president of industry body United Fresh, said fruits like mangoes, pineapples and even table grapes would be impacted.

'We would have traditionally had mangoes, for example, out of South America. There's a mango season where you'd be pulling a tremendous amount of volume in container shipments but because we're not sure of its arrival dates, because there are so many delays and uncertainties, we're simply not taking the risk and bringing that product in,” said Prendergast.

'Most importers are looking at every option that's available to them, airfreight also has issues because there are simply not as many flights as normal coming into the country.

'We are seeing grapes being brought in by airfreight, which we haven't traditionally seen in this country for a number of years, so when you see product that's airfreighted in you will see a higher price on that product compared to seafreight.”

Fresh Direct produce import manager Doug Hamilton said increases in shipping costs would be passed on to the consumer.

'Pre-2020 there would be a ship for example from the States every week. Now you're lucky to get one every three weeks, sometimes the ships are four weeks apart,” Hamilton told RNZ.

'For example, grapes coming from California, when the ships arrive there, there isn't enough space to get four weeks’ worth of fruit on the ship - so we are constantly running out of product.

'The buy price for these products is virtually the same. It's the cost of freight that's putting it up, so as long as there are freight delays and issues the prices will remain that bit higher.'