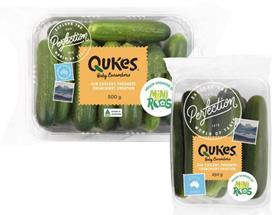 Perfection Fresh’s Qukes baby cucumbers will be positioned as an ideal snack for Australia’s next generation of soccer stars.

Under a deal signed with Football Australia, the country’s governing body for soccer, Qukes will become a partner of the MiniRoos grassroots programme. The brand will also be an official supplier to the Socceroos and Matildas, Australia’s men’s and women’s national teams.

“Over the next two years, Qukes will partner with Football Australia to help deliver the MiniRoos program nationally, supporting girls and boys aged between four and eleven to engage with football, learn the game, be active, and make new friends in a diverse, safe and inclusive environment,” according to a joint press release from Perfection Fresh and Football Australia.

Football Australia chief executive, James Johnson, said the partnership would promote the importance of healthy eating to Australians, while also encouraging children to enjoy the physical and social benefits of the sport.

“Football has a participation base of nearly two-million Australians – including nearly a quarter of a million participants in the MiniRoos bracket – and can act as a powerful vehicle to deliver positive messages to the Australian community,” Johnson said.

The partnership announcement comes as Perfection Fresh launches a new, national television campaign for Qukes, ahead of the return to school for families across Australia.

“Our partnership with Football Australia and the MiniRoos allows us to reach the next generation of fresh produce consumers, educating them on the benefits of fresh produce, healthy eating and regular activity. We want to get kids ‘qrunching’ on Qukes and football as an inclusive, grassroots and community sport is the perfect partner.”