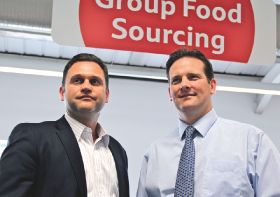 Group Food Sourcing, the procurement division established by retail company Tesco in the spring of 2010 to deliver a more streamlined, efficient system of food sourcing for all 14 of the group's country operations, is more than simply a direct sourcing initiative, the projects' architects have claimed.

In an exclusive interview with Eurofruit, published in the magazine's September 2011 issue, Darren Clough and Matt Simister of retail giant Tesco said GFS was determined to help suppliers sell more and insisted it was wrong to suggest the group wanted to source all of its fresh produce direct.

Over the past few weeks, Tesco has met with suppliers to provide more details about what it believes GFS will be able to offer in terms of a more integrated procurement strategy across its entire global supply network, delivering on the promise of its previous incarnation Produce Group Sourcing and taking up the work previously carried out by other Tesco units Asia Food Sourcing and its International Buying Office.

"Before we communicated with suppliers everyone feared the worst, that this was all about going deeper down the chain and taking bits of added value out. That's not what it's about," GFS director Simister told Eurofruit.

"It is about making the right product at the right price more accessible to a bigger market. Vertical integration can be taken out of the equation completely because it's just not on the agenda."

Simister said GFS was working hard to increase its business with the world's leading growers and suppliers, a move he said would help Tesco accelerate its own business in all markets.

"We have a big business in central Europe and a potentially very big business in Asia to feed, but the product quality and some of the supply chain infrastructure is not there in some of those areas," he said. "That's what we're here to develop and accelerate."

According to Darren Clough, Tesco's produce sourcing director, the biggest difference following the establishment of GFS has to do with capability and visibility.

"It's about having the right operating model, so we're working with growers, importers and various people and asking them how can we get better," he said.

Growers and importers already working with Tesco would be rewarded under the new scheme, he suggested, providing they were able to deliver what the market required.

The full interview with Tesco will be published in the September 2011 issue of Eurofruit.