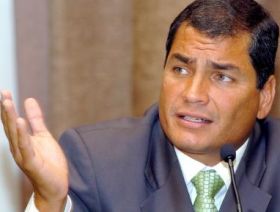 Ecuador’s president, Rafael Correa, has threatened to nationalise Ecuadorian banana exporters that acquire fruit outside the official framework and fail to comply with the country’s official price.

In an official statement, Correa claimed that a number of exporters used “tricks” to avoid in an indirect form paying the state banana price by obliging producers to return part of the payment in cash after it had been made through the central bank.

The president called on producers involved to “overcome their fear” and report guilty exporters, which he said would then be nationalised and “managed directly by the government”.

Correa added that the Ecuadorian government would also take legal measures to fine “opportunistic” exporters that did not comply with official regulations.