The heirloom variety, grown organically in Argentina, will be available in the US during the first week of March 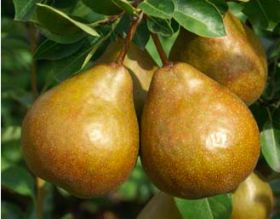 US organic importer CF Fresh is to introduce the Durondeau pear into the US organic fresh produce market through a new deal with Argentinean grower Agro Roca which produces the fruit in Rio Negro.

The first supplies, packed in 10kg cartons, will arrive in the US during the first week of March but total volume will be limited this season at 1,500 tonnes, according to a press release from the company.

Agro Roca’s agronomists have been working for several years to identify and cultivate promising new – and reintroduce old - varieties for the organic market, CF Fresh said.

The Durondeau pear was originally cultivated in the garden of M. Durondeau, in the village of Tongre-Notre-Dame, Belgium, but the fruit is also sometimes called Tongre or De Tongre pears, after the city.

According to CF Fresh, the variety was grown in the US as early as 1858 but seems to have since largely disappeared from cultivation in the western hemisphere.

“It is not a long storage pear, but they are first-rate for fresh eating, tender and juicy with a sweet, rich, and delicious flavor. They have an attractive golden color with streaks of red blush,” the company explained.