Small number of growers who made mistakes when applying approved spray are now under investigation, company confirms 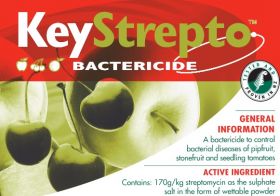 International kiwifruit company Zespri has sought to reassure consumers and customers that all of the fruit it sells remains residue-free and completely safe to eat, following several reported instances of a plant antibiotic being wrongly applied to vines in New Zealand.

The comments came following reports in the national press that around 40 growers had apparently misapplied KeyStrepto, a branded streptomycin antibiotic which, for the first time this year, was used as a spray on kiwifruit vines in New Zealand that were considered susceptible to the bacterial infestation Psa-V.

According to Dave Courtney, Zespri's senior communications advisor, the growers in question alerted the company to the potential problem during a routine pre-harvest consultation.

Speaking to Eurofruit, he confirmed: "A small number of growers are under investigation by the Ministry of Primary Industry (MPI) for not following the rules."

Although KeyStrepto has been in use in New Zealand since the 1970s, until this year it had never been used on kiwifruit vines.

However, around 10 per cent of New Zealand's kiwifruit growers applied to spray streptomycin this season as part of their ongoing efforts to combat Psa, with the vast majority doing so at the correct times and in the approved way.

Any grower wanting to use the antibiotic was also obliged to have their orchard audited first and, once approved, could only spray KeyStrepto up to three times before the vines flowered.

"These guys applied to use KeyStrepto and did so within the rules, so with them there is no issue of residues on the fruit," Courtney said.

A NZ$1.5m (€900,000) programme of testing to monitor the usage and impact of streptomycin had also ensured that more than 99.5 per cent of the kiwifruit produced this year had been cleared for sale and consumption, he added.

The 40 or so growers who used streptomycin incorrectly – thought to be either by injecting the vines instead of spraying them or by applying the antibiotic outside of the regulated period prior to flowering – have now been referred to the MPI and the fruit in question will be destroyed.

Asked what had gone wrong, Courtney continued: "They might have injected the vines, or sprayed outside the window, but so far that is unclear and for MPI to find out."

The growers thought to be in breach of the rules are responsible for producing a combined total of around 500,000 trays of kiwifruit per season, meaning they account for less than 0.5 per cent of New Zealand's annual kiwifruit production.

Kiwifruit Vine Health (KVH), the organisation established recently to lead the fight against Psa in New Zealand, expressed its disappointment at the growers' apparent mistake.

"KeyStrepto is an important control element against Psa-V in the vulnerable spring time," said KVH acting chief executive Terry Richards. "We know if it is used according to rules authorised by MPI there is no danger of residues in fruit. We want to be able to use that effective tool in future."

He added: "We are thankful residue testing is in place so we can have absolute confidence that no fruit reaching consumers either here or overseas, will contain residues."