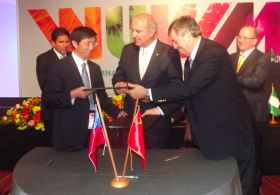 Asoex president Ronald Bown said the move gives Chile’s fruit industry greater opportunities for growth within China and Asia in general. “One must bear in mind that China and Hong Kong – Chile’s main markets in Asia – grew by 18 per cent last season,” he said.

Under the terms of the deal, both organisations have agreed to carry out regular trade missions, exchange information and ideas and “jointly incentivise actions that will benefit Chinese and Chilean consumers”.

CAWA president Zengiun Ma said the association’s markets supplied around 70-80 per cent of the population, equivalent to 1bn people. “This agreement will stimulate imports of new products and varieties from Chile, which will benefit Chinese wholesalers and consumers alike,” he said. Zengiun highlighted the fact that Chilean fruit – particularly cherries – enjoy a good reputation in China thanks to its quality.

The accord was reached yesterday in Santiago where the 28th Congress of the World Union of Wholesale Markets is currently being held. Chilean agriculture minister Luis Mayol, who was also at the meeting, said “this agreement offers our exporters the chance to consolidate their position as a major supplier to the Chinese market in products such as cherries, table grapes and blueberries, which are highly regarded by Chinese consumers.”