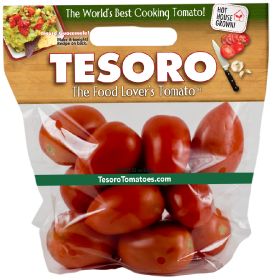 US company The Produce Exchange has revealed that it has sold more than 3m packs of Tesoro, a branded version of the award-winning Intense tomato variety originally developed by Bayer CropScience division Nunhems in Europe.

Launched in October 2011, Tesoro tomatoes are billed as the first “all flesh” or “no gel” variety of cooking tomato to be sold through retail in North America.

With more than 2,500 stores across the US and Canada reported to be stocking the tomato, and more signing up on a weekly basis, The Produce Exchange said Tesoro had helped create a new market segment in the tomato category – specifically the cooking tomato.

Recently referred to as the “best tomato when used in a recipe” by Scientific Certification Systems, the Tesoro-branded Intense tomatoes are being marketed to consumers in North America as offering unique characteristics that add flavour and texture to food.

Not surprisingly, the fact that it retains most of its water when sliced has been identified as the unique selling point. “In a world where ‘sweet and juicy’ has been the mantra of tomato growers and seed companies for years, Tesoros offer a new functionality when used in a recipe,” commented Marty Mazzanti, founder of The Produce Exchange. “Tesoro will change the way you use tomatoes.”