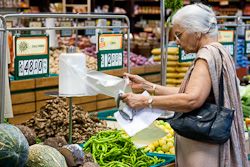 After a lengthy political struggle, India’s government won a critical vote on Friday to allow majority-share foreign direct investment in the country’s retail sector, a move that opens the way for major international retail chains.

In a Friday vote in India’s upper house, the Rajya Sabha, a bill aimed at banning foreign direct investment (FDI) in the country’s retail sector was voted down 123 to 109 against.

It was the final step in the demise of the bill, which was voted down in India’s lower house on Wednesday last week.

The result is a victory for India’s United Progressive Alliance government, which has been facing loud opposition to its moves to open up the country’s retail sector.

“It will introduce new technology and investment in marketing agricultural produce. India must take full advantage of modern technology and operational and management experience of big supply chains in the food retail business to make this happen,” stated India’s prime minister Manmohan Singh following the vote.

The ability for major international retail chains to enter the country under their own banners now rests on individual state governments permitting their entry state-by-state.

Delhi looks likely to be the first to open up, with the state government announcing on Sunday it would bring in a bill to allow FDI in multi-brand retail, reported the Hindustan Times.

“The amendment will allow multinational retailers to purchase produce from farmers directly. Current provisions don’t allow this direct link and demand the produce to be routed through Azadpur mandi.”

Tesco has reportedly already announced a push into the Indian market, where it has already partnered with local giant Tata to roll out a chain of Tesco-style supermarkets under the Star Bazaar brand, which it supplies from its own distribution centres.

“Tesco welcomes this positive development and we are reviewing the conditions,” a Tesco spokesman said in a statement.

“We already have a successful franchise arrangement with Tata’s Star Bazaar stores and we are hopeful that this development will allow more Indian consumers, businesses and communities to benefit from retail investment.”