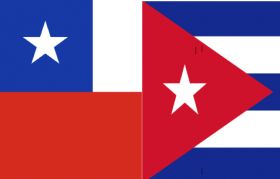 Government representatives and member of more than 15 companies formed part in a Chilean trade mission to Cuba to foster new business opportunities between the two countries.

The visit follows a realignment of Cuban economic policy that has resulted in the Caribbean country becoming increasingly open to foreign investment and trade. Agriculture and health were the two sectors singled out as being ripe for investment from overseas.

Asoex president Ronald Bown and representatives from the Ministry of Agriculture were among those who took part in the initiative.

During the visit, the Cuban government presented a total of 240 projects that could be of interest to foreign investors worth an estimated US$8.7bn.

Earlier this year, Cuba adopted a new foreign investment law abolishing duty-free zones and industrial parks while expanding areas for investment. Under the new law, investment is allowed in all economic sectors, while also providing for investments in stocks and other securities or bonds, public or private, that do not fit the definition of direct investment.

“A number of mutual cooperation agreements were agreed during the previous administration of Michelle Bachelet and we are here to reactivate those agreements,” he said. “We are convinced that this is the way forward when it comes to boosting the natural and close relationship that has traditionally existed between the two peoples.”