Egypt’s expansion of the Suez canal will please shippers, but critics raise dire need for investment in Nile Delta 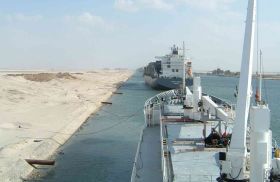 Egypt has completed a huge multi-billion dollar expansion of its Suez Canal, boosting capacity and reducing waiting times for ships.

The new canal allows ships to pass in both directions, thanks to a waterway that is 40 metres wider, a feature expected to limit waiting times to eight hours rather than the current 18 hours.

Egyptian president Abdel Fattah al-Sisi, who ousted predecessor Mohamed Morsi in 2013, announced the US$8.5bn expansion last year. It is expected to increase the canal’s revenues from US5.5bn to US$13.5bn by 2023.

While some see the canal eventually rivalling Dubai’s Jebel Ali port for local dominance, critics argue that the need for investment was far more pressing in Egypt’s Nile Delta, home to nearly half the population and whose famously fertile land has long been under threat from rising sea levels and sinking sediment.