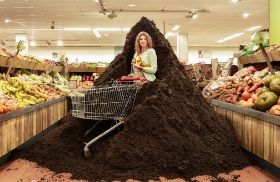 Since the start of the year, Dutch organics specialist Eosta and its Nature & More programme have been focused on highlighting the true cost of conventionally grown fresh produce, including both the environmental and the social impact, and a new project with customers including organic retailers Ekoplaza in the Netherlands and Alnatura and Dennree in Germany, looks set to drive the campaign forward.

The project seeks to make the actual cost of fruit and vegetables visible to shoppers for the very first time, with the ultimate aim of demonstrating that it is not organic food that is too expensive, but conventional food that is too cheap.

From May, various Nature & More customers in the UK, Sweden, Germany, Denmark, Finland and the Netherlands are displaying information cards revealing the true price of items including pears, pineapples, oranges and lemons. In the UK, these cards will reportedly be included with organic Nature & More pears.

The cards bear on them a flower, whose six petals illustrate the monetary cost of conventional fruit and vegetables to the climate, water, soil, biodiversity, social cohesion and health. To enable direct comparison, the cards also display the significantly lower true cost of producing organically in the same region.

"The importance of this information is considerable because we are not currently getting an accurate picture of the actual cost of food production,” said Nature & More CEO Volkert Engelsman.

Engelsman used Argentine pears, large volumes of which go to the UK, as a useful example. “Consider the climate costs,” he said. “Artificial fertiliser and pesticides are used in their cultivation. These are made with fossil fuels which lead to carbon dioxide emissions. At the same time, farmers are not required to compost to keep the soil fertile, so less carbon dioxide is stored in the soil."

Using the method developed in 2014 by the UN’s Food and Agriculture Organisation to calculate the hidden costs of food production, Nature & More worked out that the hidden climate change-related cost of conventional pears in Argentina was £987 (€1,250) per acre per year, with the hidden costs associated with water pollution and soil erosion estimated at £236 and £365 per acre respectively.

“Taxpayers ultimately have to pay the costs that governments incur for water purification and irrigation water subsidies or those costs get pushed into the future when subsequent generations will have to pay for them – with interest,” Nature & More stated in a press release.

The company has also calculated the true cost of pears produced organically in Argentina’s Rio Negro Valley by grower Hugo Sanchez. Even without taking into account the costs for biodiversity, health and social impact, Nature & More’s organic pears delivered a social advantage of at least £718 per acre. This equates to an advantage of no less than 4.4p per kilo, despite a 17 per cent lower production per acre.

“The numbers prove our point,” concluded Engelsman. “Organic food is not too expensive; conventional food is too cheap!”