CR pineapples in for bumpy ride

Demand is rising steadily but erratic supply continues to cause considerable price instability. 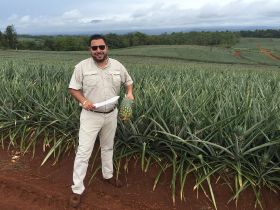 Adverse weather and strong competition from the juice market will mean a shorter supply of Costa Rican pineapples – particularly larger sizes – for the European market which is likely to persist until the second half of 2017.

According to Frank Ocampo from Hagé International, heavy rains in the central and north of the country have hampered fruit growth and limited the availability of larger fruit for export. The result, he says, will be firmer prices on the European market.

Gilles Marit from The Fruit Farm Group (TFFG) which forms part of the Univeg group, says the situation has been compounded by the droughts that the country suffered at the end of 2015 and beginning of 2016 which disrupted planting schedules for the crop cycle for 2017.

“Another factor that is likely to reduce supply in the first half of the year is the growing tendency for companies to set aside some of their area for a third crop cycle which is largely destined for processing,” he explains, adding that demand from the juice market in particular is surging.

The past few months have been a bumpy ride for Costa Rican pineapple exporters. A strong start to 2016 saw prices reach their highest levels for almost a decade, attractive a surge of speculation that disrupted the market and sent prices tumbling. The long-term trend, however, is largely positive, with demand rising across Europe and new markets springing up in eastern Europe, the Middle East and Asia.

Costa Rica dominates the international pineapple market and in terms of quality and continuity of supply it is streets ahead of rival producers, its climate and soil being ideally suited to the cultivation of pineapples.

Hagé sources about 90 per cent of fruit for its fixed programmes from Costa Rica and this is unlikely to change in the foreseeable future. “Even when you take climatic factors into account, Costa Rica comes out on top,” he says.

“We have carried out trials in Ecuador and Colombia in the past but very little of the fruit comes from certified farms and in Ecuador’s case, it takes an extra week for shipments to reach the market, which reduces the shelf-life of the fruit.”

Another factor that sets Costa Rica above the competition is the sheer volume it is able to supply. With around 40,000ha, the country accounts for 60 per cent of global production. When it comes to ripening the fruit and achieving the optimum colour the industry has built up a level of expertise that other emerging suppliers cannot match.

Nevertheless, Ocampo observes that quality in Ecuador and Colombia is improving every year and it is only a matter of time before they catch up. Other countries including Mexico, Peru and Panama are also ramping up production and are likely to play a larger role in the market in the coming years.

However, Costa Rica remains the best option for retailers when it comes to establishing direct supplies, an objective that both Hagé and TFFG have set themselves for the years ahead.

While demand in Europe remains buoyant, both companies are looking to diversify their export markets. In Hagé’s case, this means a growing focus on eastern European countries where consumption still lags behind established markets such as Spain and Germany.

TFFG is also eyeing new opportunities in the east. “In Russia we’re seeing an increase in demand and not just during the traditional peak holiday periods like Christmas and Ramadan but throughout the whole year,” notes Marit.

Further afield, the company has set its sights on Asian markets like South Korea, Japan and China. The Chinese market in particular presents an excellent opportunity for Costa Rica thanks to the preference shown by the affluent middle classes for Costa Rican pineapples as opposed to those from traditional suppliers such as Thailand and the Philippines.

“Once the import protocol is in place we hope to become one of the first Costa Rican companies to penetrate this market,” Marit says.