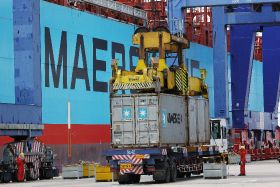 The use of refrigerated containers in Colombia’s fruit export industry rose sharply last year, reflecting the boom in shipments of bananas, avocados, pineapples and other products.

In an interview with El Espectador, Juan Camilo Velásquez of Maersk Line Colombia said that refrigerated containers now account for a market share of 25 per cent, up from 10 per cent in 2015. Overall, Colombia saw a 9 per cent increase in exports in containerised cargo last year.

The biggest increase was in bananas, where companies are switching from conventional reefers to container ships which provide a cheaper, more efficient option.

“Because of this fruit is able to reach new markets. Previously, ships [carrying bananas] had to go to large ripening centres in Europe such as Antwerp and from there the fruit was distributed to other destinations,” Velásquez said, noting that this helps Colombia compete with countries like Ecuador and Costa Rica.

Maersk now loads 500 containers a week with bananas from Colombia. Velásquez said the higher volume is attracting more shipping companies and creating new routes, paving the way for an increase in exports of other products including Hass avocados and pineapples.

Colombia saw a 9 per cent increase in exports in containerised cargo in 2016.

With respect to 2017, Velásquez predicted that banana shipments would continue to grow with new services to Philadelphia and East Coast market, while avocado shipments would also rise.