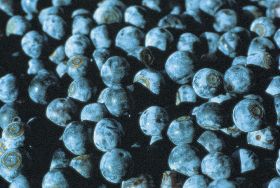 Blueberries are one of the top organic growth products for Chile

Chile’s fresh produce sector is anticipating mid-long term growth in organic exports to Europe and the US thanks to rising consumer demand for organic fruits and vegetables, with notable increases already being seen in a number of product categories, according to the Chilean Fresh Fruit Exporters Association (Asoex).

The forecast for export growth follows Chile’s signing of a mutual organic certification recognition agreement with the European Union (EU); a factor which Asoex believes will be a major contributing factor in the increasing importance to the country of organic fresh produce exports.

Under the terms of a deal sealed in April, Chile and the EU have agreed to mutually recognise the equivalence of their organic production rules and control systems.

Effectively, this means that all organic products – including fresh produce – certified and produced in Chile can be placed directly in the EU market and vice versa. Organic product logos used by Chile and Europe are also protected under the agreement.

With the signing of the deal, Chile has become one of the first non-European countries to have a mutual recognition accord of this kind with the EU, according to Charif Christian Carvajal, Asoex marketing director for Europe and Asia.

“In practical terms, any Chilean exporter that complies with Chile’s organic certification is also able to use the EU organic logo on their packaging – we have become the first country outside the EU to be recognised in this sense,” he explained.

According to statistics from ProChile, some 223 grower-exporters are now involved in Chile’s organic fruit and vegetable sector.

One product that has shown spectacular export growth in recent seasons has been cranberries, which increased by 983 per cent between 2015/16, while organic blueberries and raspberries also recorded significant export rises over the past five years.

“There’s strong demand for organic blueberries in the US and Europe,” he said. “The organic certification agreement will also give Chile an extra competitive advantage over other exporting countries.”

Asoex president Ronald Bown said: “This recognition offers a reassurance and piece of mind to Chilean exporters that when they are shipping organic products to Europe, they can also have the confidence that these products are already recognised as organic within the EU.”

One recognition of the increasing importance of Chile’s organic fresh produce sector was the decision by the US Department of Agriculture (USDA) to choose Chile as the site for training its officials in organic production regulations at a Latin American level. “The USDA’s decision shows how Chile is becoming a central point of reference for organic production and exports,” said Bown.

Looking ahead, Asoex is exploring options for further promoting Chilean organic products at trade fairs in the months ahead, with are likely to include an increased presence at Germany’s Biofach and Green Week events in early 2018.

In the year to date (up to 2 July), Chile’s organic fresh produce exports totalled 18,150 tonnes, 76 per cent of which was exported to the US and 21 per cent to Europe.

The majority of the organic fruit exports were accounted for by blueberries, apples and kiwifruit, Carvajal added.