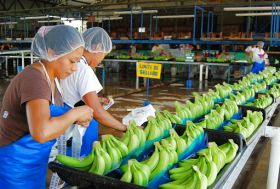 Bananas could become the next fruit to gain access to the Chinese market as the Mexican government continues to seek stronger trade links with Asia as part of its market diversification strategy.

In a statement released during a visit by a delegation from the National Health and Food Safety Service (Senasica) to Beijing to speed up the finalisation on an import protocol for Mexican bananas to China, the Ministry of Agriculture, Livestock, Rural Development, Fisheries and Food (Sagarpa) said Asia offered a huge opportunity to increase Mexico’s presence at a global level.

“China represents a great opportunity for Mexican bananas, exports of which are currently concentrated on the US and European markets,” the ministry said, adding that Mexico has the capacity to produce 20,800 tonnes of bananas for export a year with a value of US$104m.

In the past three years China has granted 11 protocols to Mexico for the export of products including avocados, raspberries, blueberries, blackberries, corn, pork and beef.

The ministry also highlighted its growing collaboration with the government of Singapore in a bid to increase air and sea routes between the two countries.

Mexico regards Singapore as a gateway to Southeast Asia and an ideal distribution platform from which to reach markets like Indonesia, Vietnam and India, among others.