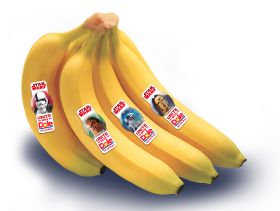 Leading fresh produce company Dole is hoping to use the marketing force of its new Star Wars licensing deal with the Walt Disney to promote hundreds of millions of branded fruit and vegetables in US and Canadian supermarkets.

Announcing plans to “recruit generations of Star Wars fans” during an 18-week campaign starting on 8 October, the group said it was calling on consumers to “Unite for a Healthy Galaxy”.

A wide range of products including bananas, pineapples, blueberries and several types of vegetable will carry the Star Wars branding and feature Rey, Finn, Kylo Ren, Poe Dameron and other characters from Star Wars: The Last Jedi – the latest instalment in the highly successful film franchise due for release in mid-December.

“I have a good feeling about this,” commented Bil Goldfield, director of corporate communications for Dole, who predicted that associating Star Wars characters with healthy eating would make a significant impression on families.

“The Star Wars universe is enormous and its appeal and archetypes span multiple generations,” he explained. “I watched it with my father 40 years ago and it still remains relevant and influential today with my young daughter.

One of the most interesting elements of the new campaign will be Dole's apparently unprecedented co-branding of retail produce departments, with so-called ‘takeover’ packaging used for the first time in the company’s history.

Dole also plans to release three sets of limited-edition banana stickers inspired by the film, and shoppers will be presented with character-inspired recipes, limited-edition stickers and a weekly scan-to-enter competition offering the chance to win Last Jedi-themed toys.

The campaign will continue until mid-February with a dedicated microsite, digital interaction, a downloadable app, and blogger and social media programmes.

Unite for a Healthy Galaxy is the latest in a series of healthy living collaborations between Dole Food Company and the Walt Disney Company, designed to help families to eat more healthily.

Previous Dole-Disney initiatives include last year’s Moana promotion and this year’s Beauty and the Beast and Cars 3 campaigns.